Boy, during the 2016 elections, ad agencies sure did show everyone how their wacky little stunts could help keep Donald Trump out of office. Yeah, yeah … the coiffed one may have had a little help from some Russian folks, but the world needs agencies to weigh in on massive geopolitical matters.

We impact culture! We have to show everyone that we’re relevant and can keep on top of current affairs!

There are some agencies who can genuinely claim cultural relevance and you can pretty much figure out who they are.

So here we are at a big moment in U.S. history as the Mueller Report continues to be picked apart and what’s the first thing that we need? Something to show the world that, despite the fact that our entire way of life is being altered through this 400-plus page document, we should have some FUN with it!!

Maybe that’s not a great idea, but that didn’t stop SS+K from creating “My Mad Mueller Report,” a MadLibs-style game (which appears to be a glorified Google Form) whereby you can provide words, just like the popular parlor game, to fill in those pesky redacted parts of the report.

If you want to try it, go right ahead. You can also see what it looks like below. 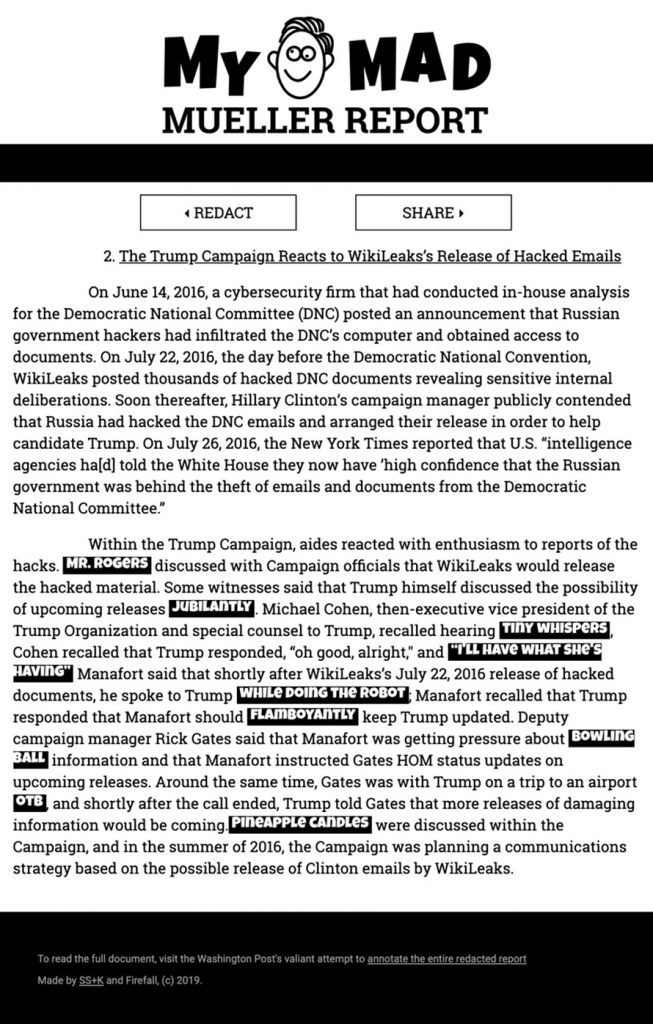 What makes this so unsatisfying is that this game simple leads to an annotated version of the Mueller Report on the Washington Post. No call to action, no link to a progressive cause or the ACLU—and a missed opportunity—which is weird since the agency loves to tout its Obama bona fides (they were the youth agency for the president in ‘08 and ‘12).

Look, we won’t bemoan someone for trying something and maybe we’re being a little salty here. But this just feels like an exercise that won’t bear much fruit and this is a serious topic that requires a certain amount of gravity … and not a game you’d play with friends over a couple of beers on a Brooklyn rooftop.

Maybe wait until the next election cycle to stick it to Trump. But, as we learned from last time, it doesn’t make a dent in the first place.