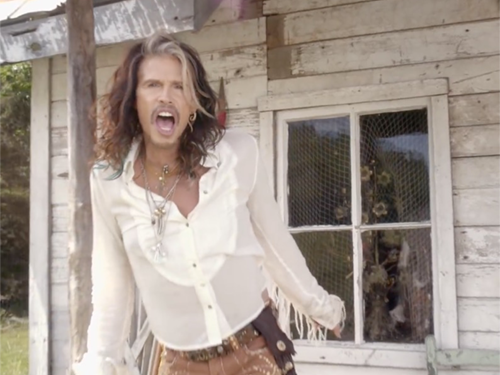 Is there any tourism ad slogan that is as uniquely tied to its city as Las Vegas? Since 2003, “What happens here, stays here” has been inextricably linked to the various campaigns over the years. Additionally, the agency responsible for the slogan and memorable campaigns, R&R Partners, is synonymous with its success.

But there appear to be changes afoot. First, reports indicate that the Las Vegas Convention and Visitors Authority account is up for grabs. But the more important news may be that the slogan is going to change, starting with an ad set to air during the Grammys (which has its own issues to sort out) this Sunday.

The thing is, the slogan may have already been leaked courtesy of none other than Aerosmith frontman Steven Tyler. According to the Reno Gazette-Journal, Tyler took to the stage in Vegas last November and did a little call and response.

“When I say, ‘What happens here,'” Tyler implored the audience, “you say, ‘only happens here!'”

.@LVCVA CEO @ShillforVegas announced at #PreviewLV that Vegas will be getting a new marketing slogan. It will be unveiled during the @GRAMMY Awards on January 26. Read more from @rickvelotta @reviewjournal https://t.co/MKpRvoXYGO

When pressed about the change, Billy Vassiliadis, the delightfully gregarious, affable principal and CEO of R&R Partners, part of the WPI network, didn’t budge.

But, in a statement to ABC, he said, “It’s personal to me and the 75 other people at R&R Partners who work on the Las Vegas Convention and Visitors Authority account to get it right. Everything we do is driven by listening to our customers and what they want and need. We are confident this new campaign delivers that and is the perfect evolution of ‘What Happens Here, Stays Here.'”

So we’ll have to wait and see what happens during Grammys night on Sunday.

But if you’re a betting person, you have Steven Tyler to thank for your win.