NEXT:Tuesday Morning Stir
PREVIOUS:A Survey Reveals That Agencies Are Getting Through Less Than 2 Hours of Deep Work per Day 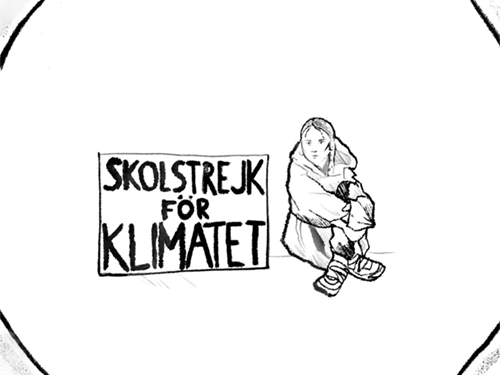 Our house is on fire. As Australia burned, the ice caps melt and temperatures swing to various record-breaking points all over the world, the United States has done little to help.

President Trump withdrew America from the Paris climate accords, and although that action won’t actually go into effect until Nov. 4th, 2020, the optics are clear. As the most public and powerful voice against climate action, Trump has found himself with an unlikely opponent: 16-year-old Greta Thunberg.

The Swedish environmental activist has gone on a world tour pushing people into action on the climate crisis. She was the youngest person to be named Time Person of the Year and, despite her young age, has been attacked by President Trump and his supporters.

But despite the detractors, she has inspired millions to fight for change. Among those inspired was Hook, a digital creative agency out of Los Angeles. The agency isn’t associated with Thunberg’s campaign and wasn’t contracted to do this work, but still created a two-minute digital film that powerfully illustrates the speech that kicked off this movement.

In Case You Haven’t Noticed from Hook on Vimeo.

The speech was obviously powerful, but the intense illustration and use of black-and-white adds an additional direness to Thunberg’s words. In addition to this film, Hook also created the website InCaseYouHaventNoticed.com which acts as a moving infographic with urgent calls to actions.

Links to 350.org, Extinction Rebellion and Fridays for Future, Thunberg’s own movement, give actionable ways for readers to make a difference in the fight against climate change.

“We wanted to do what we could to keep the momentum going,” said Vikas Bhalla, creative director at Hook. “This film was made to remind people how this movement started and how far we still have to go. Ultimately, we want people to realize that the climate crisis is already here.”

As government leaders downplay the seriousness of the situation, it’s on all people to continue pushing forward for genuine change in how we approach the world around us. In Thunberg’s words: “I want you to act as if the house is on fire. Because it is.”