We are gonna anger some ’90s kids with this contrarian take here, but whatever: Wes Anderson is overrated.

Bottle Rocket was good and Rushmore was great, but he hasn’t quite reached that level again so far in his career. Fantastic Mr. Fox was refreshing because it was so different, and he certainly hasn’t produced anything as awful as Where the Wild Things Are. But dude’s style is so singular that he’s worked himself into a corner, in our humble opinions that no one asked to hear.

We bring this up because lots and lots of people who majored in advertising (and creative writing and design) love him, so we see a fair number of spots that kind of mimic that precociousness.

The latest such campaign comes from Cossette, and it’s all about the fancy fancy ways people in Canada like to eat their McNuggets.

But see, it’s not all little Margot Tenenbaums and their overbearing grandmas. This Eminem-looking soldier with his comically exaggerated accent has a super specific nugget style, too.

This summer, McD’s Canada took to the mean streets of Snapchat and Twitter to ask the public for their own case studies in #Nuggetiquette. The campaign has its own little tweet-moji(?) thing, and it’s really all about the new sauce. 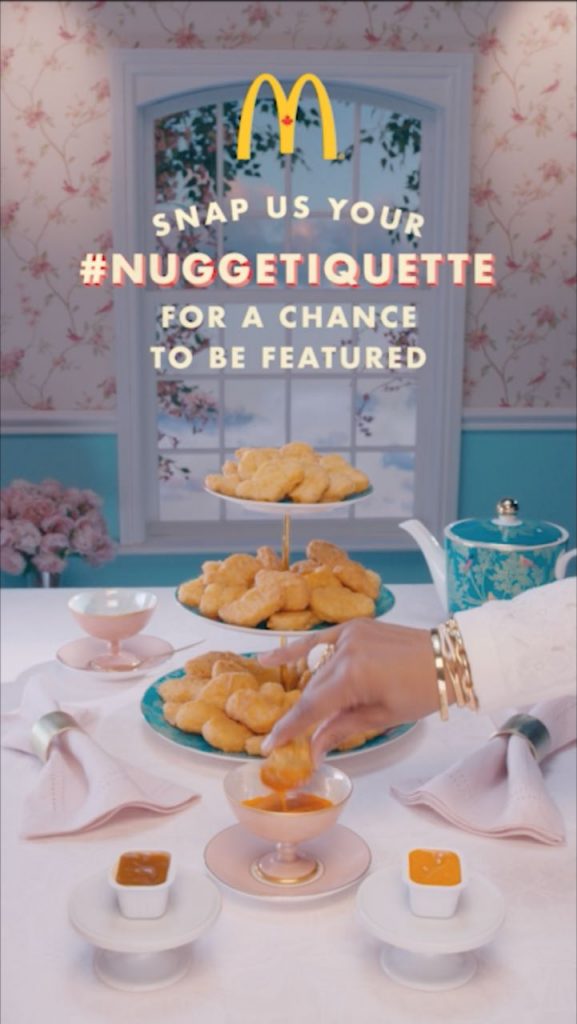 The idea is that the Cossette team will take the best of these submissions and turn them into the next :15s in the campaign.

“McDonald’s can’t post on social without hearing hundreds of comments about how our fans eat their Chicken McNuggets. From dipping in specific sauces, to dunking in ice cream, to topping a burger, everyone has their own rules,” said ACD Jordan Cohen in the press release. “We wanted to celebrate these personal codes with a new campaign that crowdsources real fan rituals and contrasts them with classic moments when etiquette really meant something.”

What sort of absolute monster DUMPS their SAUCE on McNuggets?! #Nuggetiquette pertains to dips and only dips. https://t.co/qUhUP6xiIh