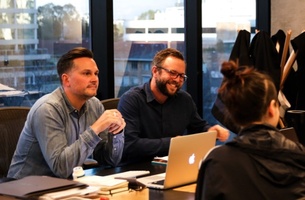 “It’s one extraordinary thing to be a world class creative, and quite another to be a brilliant leader. In Evan and Steve, we miraculously have both,” McGrath said in a statement published by LBB. “I feel so fortunate to have them and our creative leaders at large, working on, leading and then making the most of the opportunities our client’s greatest problems present.”

“The impact of both the lads is unquestionable. Looking beyond the work, the cultural significance they have in the agency is huge and they are great leaders,” added Clemenger BBDO Melbourne CEO Nick Garrett. “They have creativity and passion in equal measure, but they are wonderful people and we are very proud to have been able to promote from within.”

Roberts and de Wolf both joined Clemenger BBDO as creative directors in 2014, de Wolf a few months prior to Roberts. Both have worked on iconic campaigns such as “Hungerithm” for Snickers,  “Rethink Speed” and “Meet Graham” for Transport Accident Commission, with de Wolf also working on “Strings” for TAC in 2015.

Prior to arriving at Clemenger BBDO, de Wolf spent nearly three and a half years with 18 Feet & Rising in London as a creative director, working with clients such as Virgin Media, Nando’s Restaurants and Nationwide Building Society. Before that he spent a year as creative group head at JWT Sydney, working with clients including Kellogg’s Australia. That followed four years in the same role with Saatchi & Saatchi in Auckland, working with clients including Toyota and Telecom New Zealand, following a year as a senior art director with the agency. Like Roberts he served an earlier stint with Clemenger BBDO, spending a year as an art director with the agency beginning in 2004 before leaving to join Campaign Brief as a senior art director and general manager.