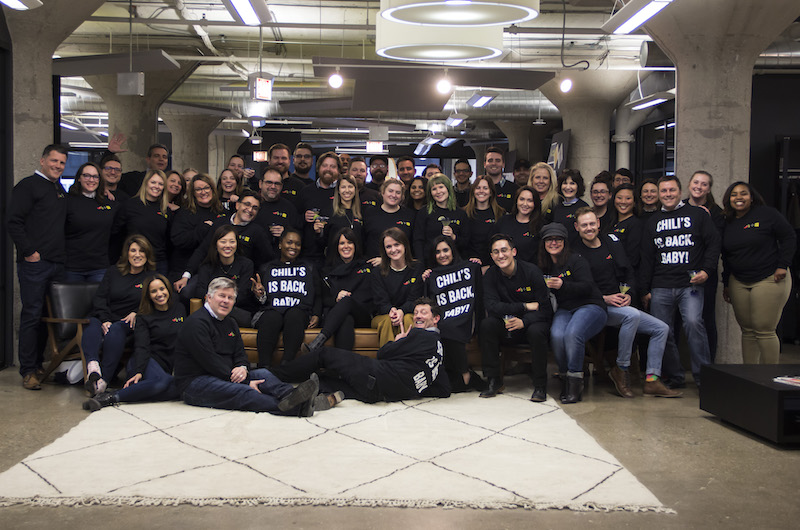 Chili’s liked it, so they put an (onion) ring on it.

Last year, the Brinker International casual dining chain concluded a review by handing a project assignment to Chicago-based agency O’Keefe Reinhard & Paul. Following OKRP’s fall campaign reviving a classic jingle for the brand and recent improvements to sales and traffic at the chain, it has decided to designate OKRP as its agency of record.

They even stopped by to deliver the news in person (pictured).

“We entered into a ‘dating’ relationship last year with OKRP at a time when our brand was experiencing significant traffic declines. The entire OKRP team has been by our side as we have climbed out of the ditch. Tom, Matt and the entire team have blown us away with their creativity and their responsiveness to a fast moving business,” Chili’s chief marketing and innovation officer Steve Provost said in a statement. “The ‘Chili’s is Back’ advertising campaign has broken through the ‘sea of sameness’ and connected with our core guests and our team members. Given the strength of this partnership, we feel it’s time to ditch our ‘commitment’ issues and cement an enduring partnership with this dynamic young agency.”

Provost took on the CMO role for Chili’s last year while the review was underway, and also oversaw a menu revamp.

“We’ve developed a strong collaborative relationship with the whole team at Chili’s and are pleased with the business momentum we’ve created together,” added OKRP CEO Tom O’Keefe. “Getting results is really the only thing that matters, and we’re looking forward to doing everything we can to help Chili’s build for a successful future.”

Chili’s spent about $105 million on measured media in 2017, down from nearly $119 the year before, according to Kantar Media.