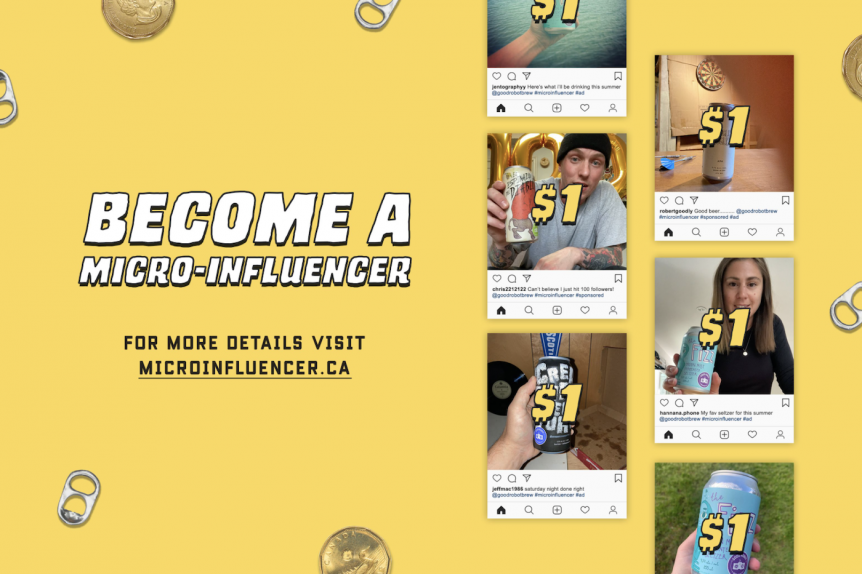 A small brewery in a small Canadian province is looking for people with small social media followings to be its influencers, and it’s utilizing the skills of a small agency to help land them.

Good Robot Brewing Company, out of Halifax, Nova Scotia, recently got into the ecommerce game and also landed its product in stores around the province. To help promote the brand, Good Robot teamed with independent agency Wunder to launch a unique promotion allowing anyone to become a microinfluencer for the brand, regardless of their number of followers, photography skills, or whether or not they have a fancy blue checkmark. Essentially, anyone who drinks Good Robot, posts about it on Instagram and tags @goodrobotbrew, will get paid $1 per post by the brand.

Rather than spend money on known influencers, Good Robot is instead looking for community folks with fewer than 10,000 followers.

To inform people about the low-paying influencer promotion, Wunder made a series of videos making light of the small follower requirement and poking a bit of fun at the influencer category in the process. In one video, an influencer is trying to make a video and keeps getting interrupted by her roommate.

A third shows a video novice fumbling with technology. People may recognize the music in the videos as “Temptation Sensation” by Heinz Kiessling, also known as the theme song from It’s Always Sunny in Philadelphia.

“When working with a challenger brand you have to fully rethink your approach and do things that no other brand is doing in your category,” Stephen Flynn, creative director at Wunder, said in a statement. “The thing we liked so much about this concept is that it takes something that could be brutally simple and straightforward, like a $1 off coupon, and reframes it in a way that is completely ownable and authentic to their quirky brand. It’s a funny and seemingly absurd approach to get people trying Good Robot and posting about them on social, which is definitely worth a dollar.

The promotion guidelines can be found on the brewery’s microsite.