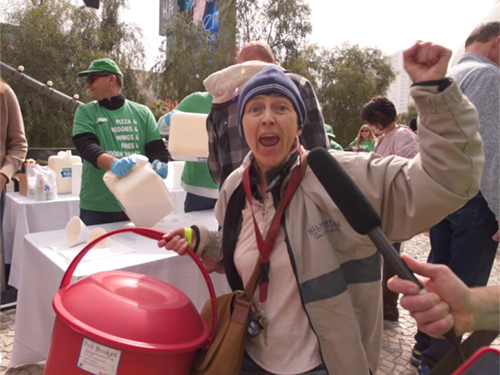 First, we have this guy putting a tattoo (allegedly) on his head to get a gig at R/GA. Then we had a hater chastise us for ignoring his icky homage—clearly Photoshopped—of Leo Burnett.

So what would other people do to get excited about advertising? May we present you with mcgarrybowen holding a Vegas bash for Hidden Valley Ranch on, what else, National Ranch Day.

Exhibit No. 1: a 24-foot tall bottle of ranch!! It’s neat, but this isn’t something new (see: gargantuan Windows phone in Herald Square back in the day).

Exhibit No. 2? Well, that would be the mitzvah that is the BYOC (bring your own container). Yep, for one hour yesterday, the good people of Las Vegas had a chance to fill up any container with the rich, creamy goodness that is Hidden Valley Ranch dressing at the New York-New York Hotel & Casino.

There were kiddie pools, beer bongs (ranch bongs?), a woman who was maybe just a little too excited to fill up her “Fun Bucket” with a bunch of dressing and, ripped right from the wacky radio morning show playbook, someone being drenched in ranch.

If you think that this all was a bit much, you’re probably right. But, let’s face it, people love their ranch dressing, don’t they? And our guess is that this stunt couldn’t have worked anywhere but Las Vegas.

Now we’re curious to know what happened to that pool filled with ranch. This is Vegas, and it’s anyone’s guess … but what happens in Vegas, er, stays in Vegas, right?