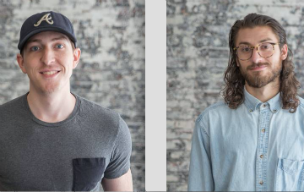 “We don’t just hand out ‘senior’ titles, you really have to earn it here,” barrettSF founder and executive creative director Jamie Barrett said in a statement. “In the past couple years, Byron and Phil have created defining and award-winning work for a number of our clients, from Bleacher Report to Cost Plus World Market to Humboldt Redwood.”

Wages joined barrettSF as an art director in September of 2014, following an art director internship with Goodby, Silverstein & Partners. He was the art director behind the Humboldt Redwood campaign Barrett mentioned in his statement and “Sports Alphabet” for Bleacher Report.

Fattore arrived at the agency in May of 2015, following six months as a copywriting intern with iris. You may remember him as one of the creatives behind the agency’s “Pieces of Shit for Trump” effort, which, as Fattore described it in a statement published by LBB, gave voice to the then-candidate’s “bedrock support base.”

According to a press release, Wages and Fattore are embracing their new “senior titles. Wages reportedly now eats dinner at 4:45 and complains about the loud rock music played at the agency, while Fattore has taken a liking to butterscotch candy and sports orthopedic shoes. According to the press release both were too busy yelling at kids to get off their lawns to provide comment.