NEXT:Jack Link's Faces Off Against Other Snacks in Carmichael Lynch's 'Versus'
PREVIOUS:BREAKING: Working in the Ad Industry Maybe Not as Great as It Seems

An art director and designer launched a site called “He Said Whaaat?” to call attention to the issue of gender-based workplace discrimination in the agency world.

The project also maintains dedicated Instagram and Twitter pages and makes use of the “#HeSaidWhaaat” hashtag and the website sells merchandise, with proceeds donated to organizations supporting women’s rights and career development for low-income women.

A female art director conceived of the project, which lets visitors anonymously submit personal accounts of sexual harassment and other misbehavior, and shared the idea with a male designer who was enthusiastic to collaborate.

“It’s so important to have men who are also feminist who advocate for women’s rights both in and out of the workplace,” the art director told AgencySpy, adding that she conceived of the project “one night after my jaw hit the ground one too many times from the things I heard men say to and about women.”

“I am speaking solely from my own personal experience right now, but from what I’ve been through and heard, so many women are still afraid to come forward and tell their stories because they are afraid of being fired or hurting their careers,” she explained. “The ‘He Said Whaaat?’ website was brought to life partially on this insight. I wanted to create a website that was a collection of all the gender discrimination happening to women globally in the workplace in order to shed light on the problem.”

Although she has chosen to remain anonymous, her co-workers are aware of her involvement in the initiative, and they have been supportive of those efforts. Moving forward, “He Said Whaaat?” hopes to continue growing online and on social media, and its organizers would like to expand any partnerships and collaborations with other organizations in the future. 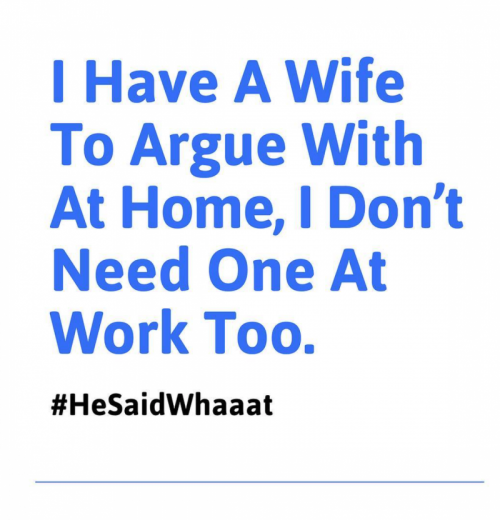 While “He Said Whaaat?” accepts submissions from all industries, the art director estimates around 85 percent of them come from those working in advertising. She thinks this speaks to the issue being especially problematic in the agency business.

“I definitely think this is an issue prevalent in the ad industry. Despite strides trying to be made, the ad industry still mainly remains a white men’s club,” she said. “Agencies need to focus more on diversity. The more diverse an agency is, the more diverse the range of the ideas and the better the work is that is being produced. A lot of the problem stems from there not being enough women in leadership roles.”

While there has been a lot of lip service paid to gender issues via campaigns and agency initiatives tackling such issues, she believes there’s a fair amount of hypocrisy prevalent at ad agencies.

“So many agencies will roll out these big ‘sexy’ campaigns all about gender discrimination. They will plaster faces of rich white men in leadership roles along with quotes regarding the hardships women face at work and pretend that this is enough to take care of the problem,” she explained. “They will get positive PR from it, pat themselves on the shoulder and feel good about themselves. Yet none of those men in those ads truly know the hardships women face while working. It feels like so many companies are jumping on the bandwagon pretending to care about these causes yet not taking any action within the walls of their own agency.”

Instead, she said, when gender discrimination issues come up at agencies, “Usually everything gets brushed off and what they said is never addressed or acted upon.”

She added that while some agencies have implemented initiatives promising to hire more women in leadership positions, “it’s always dated years from now. Why the wait? Let’s put more women in leadership now. These agencies that claim to be addressing the issues around gender discrimination are still underpaying their female employees, not giving them the same opportunities and not standing up to the problems happening on a day to day basis under their own roof. ”

In addition to hiring more women in leadership roles, one of the ways she believes the industry can improve is offering increased flexibility for working mothers.

“I strongly believe a woman should not have to pick between a family and a career. Agencies need to become more accepting with adapting flexibility in their work structure and turning their work culture in a place that doesn’t look down on women for caregiving.”

Some of He Said Whaat’s more appalling submissions are highlighted below.

Female job title: Art Director
Male job title: Creative Director
Quote/Story: “You brought me a ‘take her to dinner, romance her’ idea. I want the ‘I just wanna fuck’ idea.”

Female job title: Account Supervisor
Male job title: Marketing Manager
Quote/Story: I was managing a shoot overseas. When the shoot was wrapped, as we typically do, we take the whole team and the clients out for dinner and drinks to celebrate. After dinner, we went to a bar, and my drunk client grabbed me around the waist and stuck his tongue down my throat. I immediately pushed him off, to which he laughed and then slid his room key in my back pocket. I was mortified. My teammates thought it was funny. When I got back to the office a few days later, one of the male “leaders” in my company came over and with his hand in the air for a high-five saying, “I heard you took one for the team and made sure the client had a REAL good time…now THAT’S how you retain clients!”

Female job title: Art Director
Male job title: Assistant to Creative Director
Quote/Story: “Sorry the new direction for your concept just came up during some ‘guy talk.’ You wouldn’t want to be a part of that anyway, right?”

Female job title: Creative director
Male job title: Account director
Quote/Story: Having finished an amazingly successful client presentation in which they applauded at the end, I followed up with the account director on the project. His response was “Hmmm, maybe you forgot to button up your blouse.”

Female job title: Senior Producer
Male job title: Executive Producer
Quote/Story: When I was super pregnant, my Interactive Design Director walked up to me and said, “I’m glad my wife had a C-Section so that her vagina was preserved.”