More changes are afoot at Argonaut. 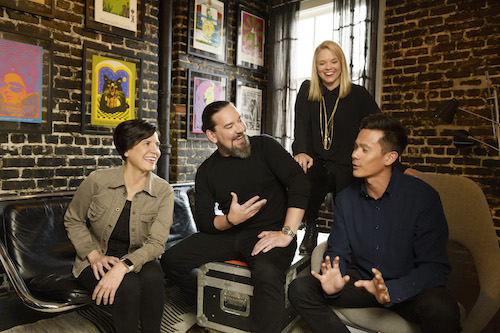 The agency promoted JT Pierce (pictured, far right) to the role, tasking him with managing people and processes, as well as a cross-section of clients and internal departments. Pierce rounds out a new leadership team that includes founder and CCO Hunter Hindman (pictured, second from left), CFO Ana Dixon (pictured, far left),  and CMO Katie Miller (pictured, far right). Notably, that leadership team does not include a CEO following the departure of Riccardi, who was the first to hold that title at Argonaut. It initially appeared as if Hindman would be assuming the chief executive role. Sources close to the matter told AgencySpy that Riccardi’s departure stemmed largely from Hindman’s wishes to take a more active leadership role and differences in their vision for the agency’s future.

“A shared vision and mission are paramount for the growth and evolution of an ambitious creative agency,” Hindman said in a statement. “JT has been an inspiring leader at the agency since he started, with strategic acumen that is equally matched by creative intuition and belief in our people. There’s no doubt he’s the most uniquely qualified candidate for this new role, and he is the perfect addition to round out our leadership team.”

“This is an exciting time to be part of this dynamic agency,” Pierce added. “We have an incredible level of talent here – people who are fostering strong and productive client partnerships and creating amazing work. I’m looking forward to doing everything I can to unlock more of that to move the agency forward.”

Pierce spent the past two years as group account director on Cricket Wireless, Argonaut’s largest account. Prior to joining Argonaut he spent three years serving as group account director on Electronic Arts, Ubisoft, Bank of the West, and 24-Hour Fitness at Deloitte Digital’s Heat. Before that he spent over four years client-side at Sony Computer Entertainment America, most recently as associate brand manager.

Cosper arrives at Argonaut from the San Francisco office of Mekanism, where he served as creative director on the Facebook and Charles Schwab accounts. He previously held creative leadership roles at agencies including Fallon, W+K, Mother, and BBDO, working with brands such as T-Mobile, Heineken, Dish Network and GE.

The agency also recently added creative director Ali Esterly to its Cricket Wireless team. She had been freelancing with the agency, following around a year and a half with 72andSunny.

“We are committed to being a standout creative agency and I am deeply excited about the creative firepower we have just added to an already potent arsenal at Argo” Hindman said in a statement.