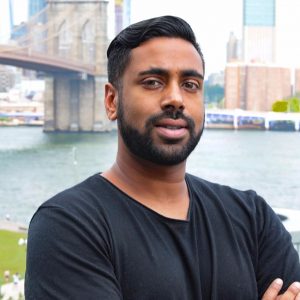 What’s up at David?

Kalathara returns to New York after 5 years at David Miami, during which time he worked on nearly every award-winning BK campaign along with Super Bowl spots like Budweiser’s “Water Cans” and the Heinz effort “Weiner Stampede.” According to Cannes, he was one of the world’s top 3 creative directors in 2017. Not exactly sure how they arrive at these listings, but we’ll trust them!

Prior to joining David, he was an ACD at Crispin Porter Bogusky.

“We couldn’t be more excited to have Tony here in Brooklyn,” said 72andSunny New York creative lead Justine Armour, who cited his “inherent, contagious optimism” in explaining the hire. Kalathara said the office “is coming together right now and I couldn’t be more excited to bring my brand of culture hacking work into the mix,” adding, “It’s the start of something special and one hell of a homecoming for me.”

But back to David.

Since co-founder Anselmo Ramos departed last year to launch his own agency Gut, the shop has lost ECDs Juan Javier Peña Plaza and Ricardo Casal along with Miami managing director Paulo Fogaca and, most recently, creatives Ignacio Ferioli and Joaquín Cubria. The latter three went to Gut while Plaza and Casal have not revealed any details about their next venture.

At the same time, the agency has hired some new talent, chiefly new global CCO Francisco “Pancho” Cassis, formerly of LOLA MullenLowe. It also opened its first office in Europe by way of Madrid.

Co-founder Fernando Musa assured Adweek last month that the agency is on solid ground and still producing work for Burger King in Europe. Keep your eyes on what has arguably become Ogilvy’s most valuable property.