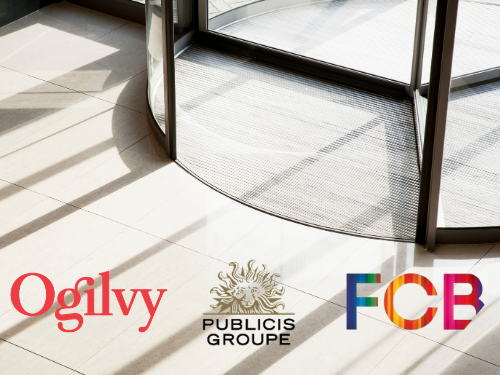 The big melt is finally on around the country and the first buds of spring should be just around the corner (don’t believe what the fuzzy little groundhog predicted). Many agency moves are sprouting up as well, from the final mergers of winter to the first personnel moves of spring.

So, let us neither waffle nor mince and get right to it as we review this week’s Revolving Door Roundup.

AKQA has promoted Luiza Baffa to managing director and Renato Zandoná to executive creative director. Baffa and Zandoná will lead the São Paulo studio, its partnerships and client collaborations.

Prior to Baffa’s promotion, she served as head of strategy and innovation in São Paulo. Zandoná was group creative director in AKQA’s São Paulo studio before being promoted to ecd.

Sally comes to Blue Sky most recently from 22squared, where she was executive director of client services. Previously, she was an executive vice president at Leo Burnett Worldwide, Arnold NYC, and Grey Group. Sally led the critically acclaimed campaign #LikeaGirl for Always while at Leo Burnett.

“Annette’s track record speaks for itself and is a true testament to her comprehensive experience working with clients to produce exceptional work,” said Blue Sky CEO Rob Farinella. “She’s a courageous leader who’s not afraid to challenge industry standards.”

Martech agency Byte has joined international digital agency Dept. Together, both agencies will strengthen end-to-end digital services for clients across the globe.

In 2020, Byte grew its global revenue by 20%, adding a number of high-growth clients to its roster, including TikTok and Twitch. The agency was attracted by Dept’s digital DNA, culture and ambitious growth plans. With Dept’s footprint of 27 offices around the world, Byte now has the opportunity to provide a full-service digital offer to its global clients. As part of Dept, Byte’s branding and management team will continue as before.

Byte’s founding partner, Alex Miller, said: “We’ve become part of Dept to accelerate global growth and supercharge our tech offerings with access to over 500 engineers across the world. We’re excited to help Dept achieve its vision of becoming the leading digital agency in the world.”

Fan platform Fandom, which has over 330 million monthly users, has appointed Nic Brandenberger as vice president of consumer marketing. He will serve as Fandom’s global brand steward, focusing on the platform’s expanding gaming business.

Brandenberger was previously at eBay, where he most recently served as senior director of brand marketing. Prior to eBay, he served as brand manager for Procter & Gamble.

“We are thrilled to add Nic and his omni-channel marketing expertise to the Fandom team during an unprecedented period of growth for the company,” said Stephanie Fried, chief marketing officer.

Rizério previously worked at CP+B Brasil, and before that was art director at Leo Burnett, LewLara\TBWA, and AlmapBBDO. He also did a stint at FCB in 2006, when the agency was still called GiovvanniDraftFCB.

“Marcelo Rizério has what we have been seeking in terms of creativity, of bringing together two essential aspects of our work: technology and craft. We have a dream team for creating new strategic and creative concepts,” said Ricardo John, CEO and CCO of FCB Brasil.

Newsome, who has 28 years of experience with the U.S. Secret Service, was most recently its deputy director, where he oversaw the daily investigative and protective operations of an agency with more than 7,000 employees globally.

He will join the NBA on March 15 and report to president, administration Bob Criqui.

“Leon is an extraordinarily accomplished security professional and leader and we are grateful to welcome him to the NBA,” said Criqui. “His vast experience with the Secret Service on a global basis will be an enormous benefit to our fans, players, teams and staff.”

Iconic lighter company Zippo has selected Ogilvy as its global creative, PR, and social agency partner, supporting Zippo’s brand and communications strategy. The account will be led out of Ogilvy’s New York office and will draw on talent and expertise from across the agency’s global network.

Lucas Johnson, senior brand manager, global marketing at Zippo said: “In Ogilvy we found a partner that valued the heritage of our brand, listened to our needs, and best demonstrated an ability to deliver integrated creative ideas and transformative strategies that will drive value for Zippo’s brand and business as we look to the future.”

“When you think Zippo, you think iconic. You think original. You think everlasting,” said Marcos Kotlhar and Danilo Boer, chief creative officers for Ogilvy New York. “David Ogilvy wrote Zippo’s original tagline in the 1960s. The line has been true to the brand since the day the product was created—”Zippo. Still Works.”

Moll has held creative positions at Mullen, Deutsch, CPB, R/GA, Leo Burnett, GMMB and Arnold, as well as being a freelancer. He has also taught at Miami Ad School and Chicago Portfolio School.

Mulhern, who will lead public relations and social media strategies for PMG’s Pavone and Quench marketing agencies, was most recently a director of marketing communications for Front Burner Brands, the restaurant management company for Melting Pot Restaurants. She was previously with EnviroMedia, as well as Hill+Knowlton Strategies and Ogilvy.

Amanda VanAntwerp has been promoted to managing director and will focus on executing the strategic vision of the agency. VanAntwerp is a five-year veteran of Preacher who started as a brand director and was most recently the agency’s director of operations. Prior to Preacher she was vp account director at BBDO New York.

Publicis New York has elevated Erica Roberts to chief creative officer, overseeing all creative at the agency, including its Power of One accounts, with clients such as Citi, Walmart and The J.M. Smucker Company.

Quad/Graphics, Inc. (Quad) and the Quadracci family’s Windhover Foundation have announced a three-year, $1 million commitment to The BrandLab, a non-profit dedicated to changing the face and voice of the marketing industry by creating opportunities for young people from diverse ethnic and socioeconomic backgrounds.

The new partnership will enable The BrandLab to expand into the Milwaukee community and bring together local agencies, corporations and student interns who identify as Black, Indigenous and People of Color (BIPOC).

“We are committed to being a catalyst for change to advance diversity and equity in the advertising and marketing profession, because we know that our work is only our best work when it reflects different voices, mindsets, experiences and perspectives” said Joel Quadracci, chairman and CEO of Quad.