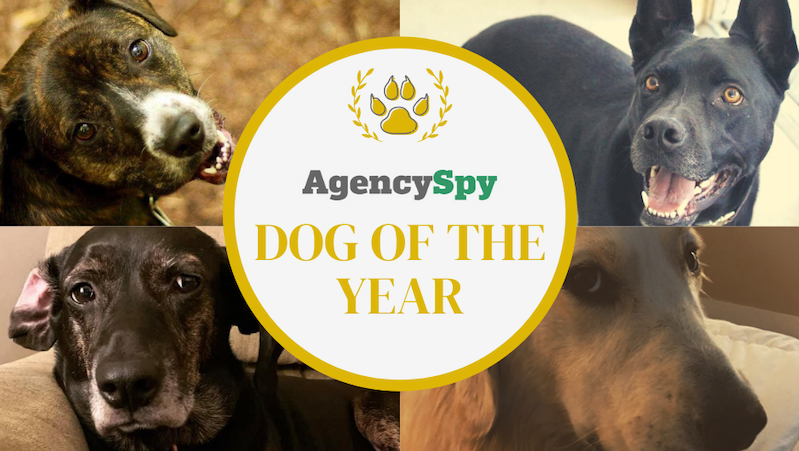 Regardless of your political persuasion, you have to appreciate the impending return of dogs to the White House (including the first-ever rescue dog to enter the presidential residence) after a pet-free presidency. We’ve got a fresh batch of AgencySpy Dog of the Year Award winners to help you celebrate the occasion, including some wonderful rescue dogs. Stay tuned for more this week in the lead-up to our Grand Pup winner.

You’ve got to love canine siblings. Our next winners hail from agency Lemmon/Hughes (L/H) and seem fairly inseparable. Pictured napping together as a trio, which is adorable, Arlo, Domino and Theo always have family to fall back on. We’re told Arlo and Theo are good big brothers, letting Domino win in a scrap. For their sibling harmony, we have awarded Arlo, Domino and Theo the AgencySpy Dog of the Year Best Sibling Trio award and we’re confident they will be just fine with sharing the honor.

#AgencySpyDOTY Arlo, Domino and Theo. Lemmon/Hughes. Domino can beat up Arlo and Theo who are the best big brothers and let her win. @AgencySpy pic.twitter.com/Ve1MgnpTGt

We were really impressed with some of the creative and excellent dog names people bestowed upon these pups. Naturally, this led us to create a category to honor some of these magnificent monikers. A few other dogs with great names could have fit into this category as well but, ultimately, wound up with different awards.

Otherwise, we reserved the AgencyDog of the Year Best Named Award for a few of our favorites: Devo from Dagger, Freddie Mercury (who also goes by Freddy, Fred, Fredward and Fredard Stark) from Chemistry and Ruckus from The Escape Pod. All of them seem like great dogs in a variety of other ways as well.

Devo, works at Dagger, can only be described as the goodest (and softest) of boys. #AgencySpyDOTY pic.twitter.com/vqCV8v4ZWN

#AgencySpyDOTY
Freddie Mercury AKA Freddy, Fred, Fredward, Fredard Stark.
Freddy is a rescue and is 100% pure-bred couch dog. He protects the fam, barks during Zoom calls, and is loved by his 2 boys.
One of the many K-9’s in the @VisitTheLab family.
Thanks @AgencySpy pic.twitter.com/SqlVaG9aBo

Next up is Ruckus! She’s a rescue from @PAWSChicago and a total sweetheart.

Ruckus wasn’t the only rescue pup over at The Escape Pod, which the agency submitted for consideration. We’re also big fans of rescues here at AgencySpy (one such rescue, Maggie, is the pictured top left in the image for this post), so each of these dogs found a special place in our hearts.

While we don’t share her enthusiasm for the pending winter, we took note of Lola’s acting chops. While some of her The Escape Pod teammates seem to have some acting experience as well, we decided to go ahead and award her the AgencySpy Dog of the Year Award for Best Actress.

We hope that Tot (named after potatoes) doesn’t have any hard feelings about that one. In addition to starring in shoots for Castor & Pollux and Merrick Pet Care, she is described as “uncomfortably energetic,” but it seems she’s mostly putting that energy to good use and getting shit done. She also manages to pull off a devil costume while delivering a perfectly innocent look. We’ve awarded Tot the honor of the AgencySpy Dog of the Year Hard-working Rescue Award.

Check out all of the Escape Pod’s entries in this thread (you may recognize Nap King Award-recipient Otis as well).

ANOTHA ONE! Meet Tot, another @PAWSChicago rescue (can you tell how much we love rescues, yet?) She’s also been the star of several @castorpolluxpet & @MerrickPetCare shoots.

Over at Tombras, Lucy seemed to be giving off major librarian/professorial vibes with her classy pair of spectacles. She also appears to keep careful track of who she has visited for pets on a given day. We’ve decided to award Lucy with the AgencySpy of the Year Most Studious Award, and we’re quite willing to look past the whole pooping in front of the boss’s office thing.

#AgencySpyDOTY @AgencySpy meet Lucy from @tombras
She is a sweet girl that makes sure to visit everyone on the 5th floor for their obligatory pets/cuddles. Only once has she pooped in front of my boss’s office and wandered into the President/Owner’s office 😬 pic.twitter.com/dRsJSOoGQu

We’re pretty sure Max over at RPA doesn’t really care about these awards. He’d likely give it about as much attention as those endless Zoom calls, which he’s perfectly content to ignore while lounging in the background and providing companionship. Clearly, Max is a dog who knows what’s important to him, and it’s generally not the work humans busy themselves with, which is why we’ve awarded him the AgencySpy Dog of the Year Disinterested Doggy Award.

All dogs seem to know how to use their cuteness to their advantage in their attempts to manipulate us, an attribute most effectively seen on display with the sad puppy eyes practice studied by canines across the world.

Not all dogs are equally adept at practicing the art. A select few seem to have a particular gift for utilizing the move to motivating guilt and acquiescence in their humans, causing them to give in to implicit demands for pets, walks and treats.

The Marketing Store’s Magner is one of these particularly adept and gifted pups and has earned the AgencySpy Dog of the Year Award for Most Effective Use of Sad Puppy Eyes. How could we resist that look?

Most Effective Use of Sad Puppy Eyes Award

@agencyspy Magner wants to know “Aren’t you done with work yet?”
The Marketing Store#agencyspyDOTY pic.twitter.com/JT3ZH7WvPW

Two very good dogs share our last award for Round 5.

Nath is a lovely Tibetan Terrier across the pond at TBWA\Spain. Not only is he adorable, but he’s also quite helpful with paperwork, as evidenced by his entry photo delivering an invoice.

Eleven hails from Atlanta agency Dagger and is equally cute and helpful around the home office. Who wouldn’t want a dog to fill out their timesheets for them?

Eleven and Nath have been awarded the AgencySpy Dog of the Year Canine Office Assistant Award with equal distinction.

Nath is a lovely Tibetan Terrier, he is always ready to help you with all paperwork, here with an invoice 😂🐾 pic.twitter.com/LPNBBpU7yv

Hey @AgencySpy ! This is Eleven from @DaggerAgency and she’s the best pup cause she fills out my timesheets for me. 🥰#AgencySpyDOTY pic.twitter.com/ihB0FQsNts

Need more AgencySpy Dog of the Year Awards? Catch up with the other rounds:

AgencySpy Dog of the Year Awards, Round 1

AgencySpy Dog of the Year Awards, Round 2

AgencySpy Dog of the Year Awards, Round 3

AgencySpy Dog of the Year Awards, Round 4