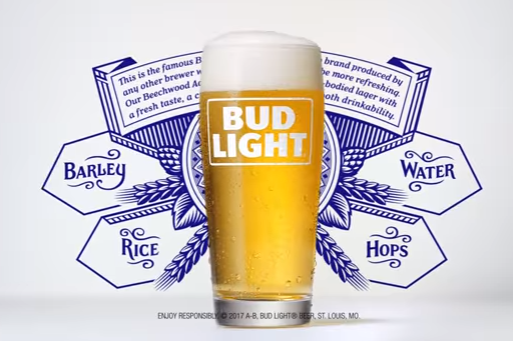 So, AB InBev and every other major brewer is obviously still feeling pretty threatened by the whole “craft” movement, even though it’s nowhere near as big as headlines might have you believe (the Brewer’s Association recently said 12.3% market share).

It’s really debatable whether the whole “movement” can survive oversaturation, especially when AB InBev keeps buying up potential threats like Wicked Weed, its tenth such acquisition.

Based on the latest campaign from Wieden + Kennedy, Bud Light wants to have it both ways: discouraging people from trying off-center brews while its parent company buys them up strategically.

This ad that launched today is really kind of perplexing.

Yeah, but do craft beers really have such crazy ingredients? Maybe if we’re talking Dogfish Head.

We kind of get what they’re going for here … maybe that’s why Bud Light will never win by marketing its product on taste.

The brand experienced “mid-single digit” declines throughout 2016, but it still sells twice as much as its closest competitor Coors Light. So Bud isn’t going anywhere, head-turning campaigns and activations aside.

But with all due respect to Wieden, it really feels like the client directed these ads.