NEXT:The Australian Burger King Has Had It with Your Kale Salads in New Clemenger BBDO Spot
PREVIOUS:Phenomenon Rebrands Nationstar as Mr. Cooper, Leads the Office in a Stirring Round of 'Man in the Mirror' 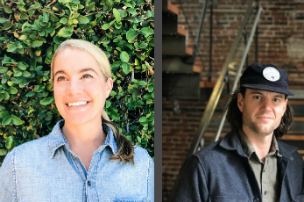 215 McCann welcomed a pair of senior hires with the arrivals of creative technologist Aaron McGuire and executive producer Mandi Holdorf.

“Aaron is our first Creative Technologist and will be sitting between the creative and production departments to bring innovative ideas and new technology to life in real time,” 215 McCann chief creative officer Scott Duchon explained in a statement. “And Mandi is one of the most widely admired producers in the business. I feel lucky that they both landed here at 215.”

McGuire joins 215 McCann following a stint with Hello Elephant, where he served as director of creative development. Prior to that he served as a technical consultant for Mod. Love The Way You Work and a contract software engineer Hipcamp. Before leaving in May of 2015, he spent around a year and a half as head of development for San Francisco agency Argonaut. He also spent three years as vice president, director of technology and innovation with Evolution Bureau and over three and a half years with CP+B, where he worked his way up to senior technical lead. One of the first external technologists hired by Facebook following its IPO, McGuire was named one of Adweek’s Top 10 US Technologists in 2011.

Holdorf has served as a freelance executive/senior producer for Facebook since February of 2016. Prior to that she spent nine years with VB+P as a producer and executive producer, after beginning her career as an assistant producer with TBWA\Lost Angeles.

“The people at 215 are what really set us apart. Smarts and talent are table stakes. Beyond that, we look for folks who are optimistic, hungry and natural collaborators internally and with all of our clients and partners,” McCann president Kelly Johnson said in a statement. “Mandi and Aaron have these characteristics in spades. We couldn’t be more flattered or excited that they have joined the agency.”