The 'tried and true' have proved powerful and profitable 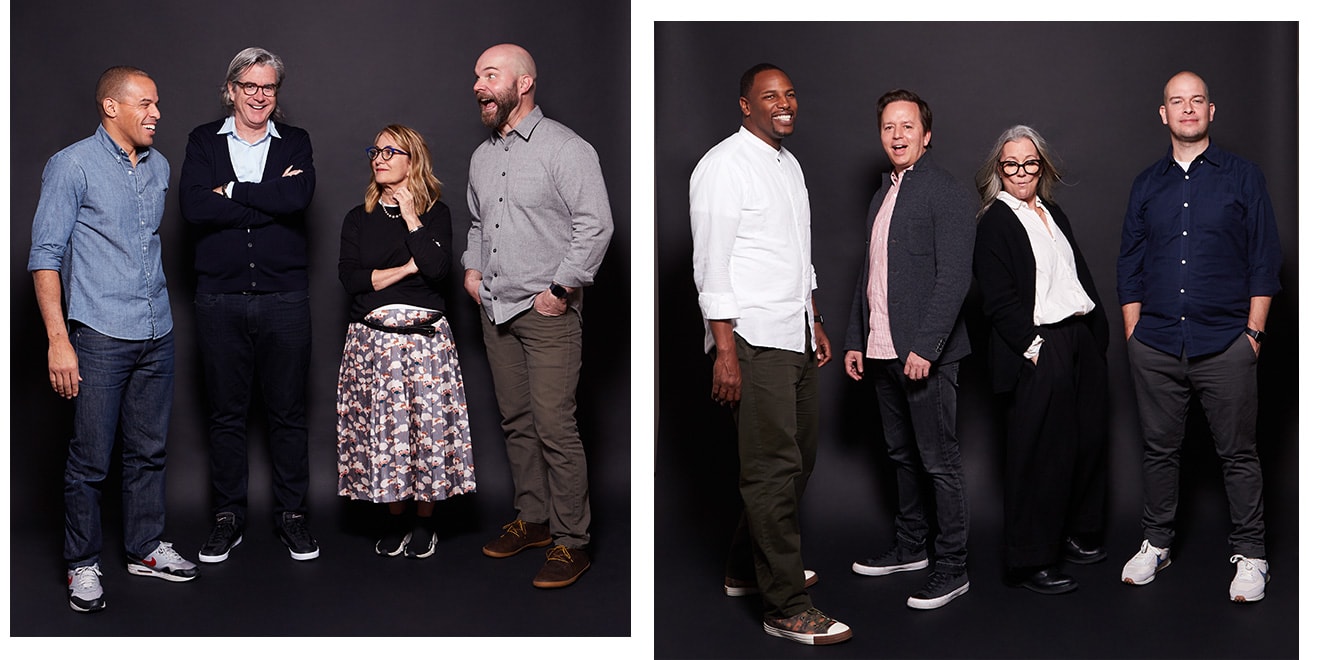 This is the first time in 12 years that an agency has won Adweek's U.S. Agency of the Year title twice in a row.
Rebecca Greenfield for Adweek
Share
By Doug Zanger
|
December 1, 2019
Share

In 2018, Wieden + Kennedy rose to the top of the industry. But there was one thing the agency hadn’t done: peak.

Coming off a year of culture-rattling buzz around its work for Nike, W+K started 2019 in the unenviable position of having to surpass its own successes. Then it did, growing revenue at a pace rarely seen in the agency’s history, expanding both its client roster and existing relationships, and winning what was arguably the most coveted U.S. account in play this year: McDonald’s.

Most of the conversation around W+K has traditionally been about its standout creativity. In 2019, however, the agency had one of the industry’s most compelling business stories, while remaining true to its reputation for oddity, advocacy and the building of successful brands.

The ad was a familiar formula for Nike, but still goosebump-worthy as the global sports brand heralded the achievement of the U.S. Women’s National Soccer Team to continue the spirit of "Dream Crazier."

“Some agencies simply ask about the brief and what they need to deliver,” says Marcel Marcondes, U.S. CMO for Anheuser-Busch. “With Wieden, we talk about the business. We share problems so that we can come up with solutions. Plus, they’re great at what they do in delivering amazing work.”

In recognition of W+K’s growth, creative leadership and restless spirit of innovation, we’ve named it Adweek’s 2019 U.S. Agency of the Year, marking the first time in 12 years that an agency has won the honor twice in a row. (Goodby Silverstein & Partners was the last to do so, in 2006 and 2007.) The wins also followed W+K’s 2017 recognition as Adweek’s Global Agency of the Year, illustrating that the shop is ending the decade with a streak of successes.

With the advertising and media landscape changing at a frenetic pace, it’s tough to resist the temptation to constantly change. But this independent sticks to what’s worked for almost four decades.

“It’s uncertain times in the new economy we’re in,” notes Colleen DeCourcy, W+K’s co-president. “There are changes in client structure, supply chain … everything. And people are nervous. But we’ve been leaning in to who we are.”

“[We’ve had] the same formula for success,” adds Tom Blessington, W+K’s co-president. “I joke about a famous Talking Heads lyric, ‘Same as it ever was.’ Tried and true is vastly underrated.”

The duo points to how brands, even with plenty of tools and options at their disposal to market directly to consumers, still find that the work and creativity coming out of the agency can build a business.

“None of these wins are possible without the power of creativity,” says Blessington.

Business with existing clients, like Facebook, KFC, Nike, Procter & Gamble and Samsung, is also on the rise. “They are all leading pillar brands in their categories—and, therefore, our opportunities have grown,” says Karrelle Dixon, managing director at W+K Portland.

KFC has tried all kinds of things to raise eyebrows and garner attention. But creating a dating simulator on Steam featuring a sexy Colonel Sanders was a masterstroke in bringing a beloved brand to gaming.

“Portland will have one of its best financial years in its history and, at the same time, we had one of our best creative years,” adds Jason Bagley, ecd at W+K Portland, referring to both Portland’s and New York’s awards hauls from Cannes, D&AD, the Emmys, The One Show and others.

Independence, long a staple of W+K since its founding 37 years ago, still plays a significant role, especially in light of two large indies dropping from the scene. Droga5, sold to Accenture Interactive, and lauded creative shop Barton F. Graf folded. While the changes sent ripples through the industry, DeCourcy contends that the narrative should be focused on what’s still out there instead of what’s been lost.

“I look around and see plenty of independent creative thinkers who have started agencies that are getting traction, and we’re excited by that,” she says. “That tells me that we have always been onto something.”

“You have to run your own race and not get too caught up in the competition, and focus on your own performance,” says Blessington.

This ad for one of the automaker’s most important nameplates, the Explorer, examined what modern-day exploration looks like. From space to the depths of the ocean and the highest peaks … to rotisserie chicken, it was filled with empathetic winks.

Since its opening in 1997, W+K New York felt like it was in the shadows of the Portland, Ore., mothership.

“We had T-shirts that read ‘Wieden + Kennedy New York: Hemorrhaging Money Since 1997,’” recalls Blessington, who was the office’s first managing director and held the role from 1997 to 2000.

Additionally, W+K New York was known as more of a two-horse shop, with ESPN (a client for 25 years) and Jordan Brand as anchor clients. According to Arthur, there was a revolving door of talent because they “inevitably needed to go somewhere else to diversify their book.” But W+K New York evolved, bringing in Gap, Heineken, Target and other high-profile clients. It also grew the Jordan account, which the agency has had since 1999.

But where the office really hit its stride was in big clients making a significant impact on culture.

Competitive agency collaborations are exceedingly rare, but W+K and Droga5 found common ground as the dragon from HBO’s Game of Thrones wreaked all kinds of havoc on the merry "Dilly, Dilly" gang.

“Dilly, Dilly” caught fire for Bud Light and spawned some of the funniest marketing in the category. The agency transformed Delta Air Lines, including creating legendary in-flight safety videos, and made high-profile work for HBO. Then W+K New York joined the roster of Ford agencies to refresh the iconic carmaker’s brand. The result is that W+K New York is no longer an afterthought and is talked about with the same reverence as Portland.

And that’s a good thing. “There’s nothing but upside in New York finding its voice,” says Bagley.

“It’s really hard to have two sizable, kickass-quality agencies in the U.S. when you’re a company like ours,” adds DeCourcy. “But Neal and Karl have made it their own.”

Keeping it fresh and unexpected to build partnerships

While media fragmentation can cause agencies agita, W+K sees it as an opportunity.

“In the past, there were fewer channels, and you could have a singular focus to get an idea that resonates,” says Dixon. “It’s a lot harder than it’s ever been.”

“We’re expanding our remit in reaction to what’s happening out there,” adds Lieberman. “It’s invigorated the agency because creative people are happy when they’re making things … and now they’re making more things than ever before.” Part of the cable network’s "Unedited" platform, this New York pop-up, celebrating Women’s History Month, collected journal entries from women across America—including the network’s stars—and was a public space for the authentic, unedited voices to be heard.

One of the agency’s guiding principles is what Eric Baldwin, ecd, W+K Portland, calls “branded everything.” In essence, it refers to how the agency can fill in some of the less obvious cracks within a brand’s marketing and evolve existing messaging, both externally and internally. KFC and Bud Light—with the use of iconic Colonel Sanders and “Dilly, Dilly,” respectively—are two examples of how this works.

“We’ve moved from having a bunch of Colonel Sanders spots going out into the world, and we’re focusing on making some bigger bets,” says Baldwin, adding that campaigns having the character as a virtual influencer are unexpected and make an impact in culture.

“The stupid thing to do is act like you need to pry ‘Dilly, Dilly’ from my cold, dead hands,” adds Lieberman, noting that ideas can run their course. “But that position is a byproduct of a larger point of view. We feel like [Bud Light] has grown up and has never been in a better place.”

The agency has also been successful in changing how brands perceive it. W+K reached out to Ford when pieces of the business were put up for review in 2018, but “we didn’t know what to make of it,” says Matt VanDyke, director of U.S. marketing at the automaker. “We admire the work and creativity, but it felt very boutique and niche.

“But when we got into the process,” he continues, “we were really impressed, and they broke down a lot of the myths that we incorrectly assumed. They’re the first to us with ideas in things like social media, or even internal communications, and that’s blown us away.”