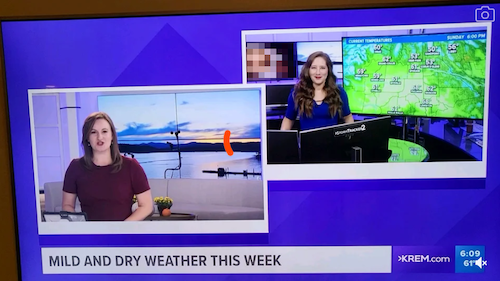 The clip, which appeared to show a woman’s backside, appeared in a monitor behind the right shoulder of meteorologist Michelle Boss while she was giving her first weather update. It aired for about 13 seconds, and neither anchor Cody Proctor nor Boss reacted to it before the station cut to the weather maps.

‘Those of us here at KREM 2 want to apologize for something that happened in our 6 p.m. newscast tonight,” said the station. “An inappropriate video aired in the first part of the show. We are diligently working to make sure something like this doesn’t happen again.'”

Daniel Walters, a local reporter for the Inlander, reported that the Spokane police have opened an investigation into the incident.

In a press release, the Spokane police department said, “the incident generated numerous calls from concerned citizens in the city and county. At the time of this release, the investigation is ongoing and no culpability of any kind has been determined.”