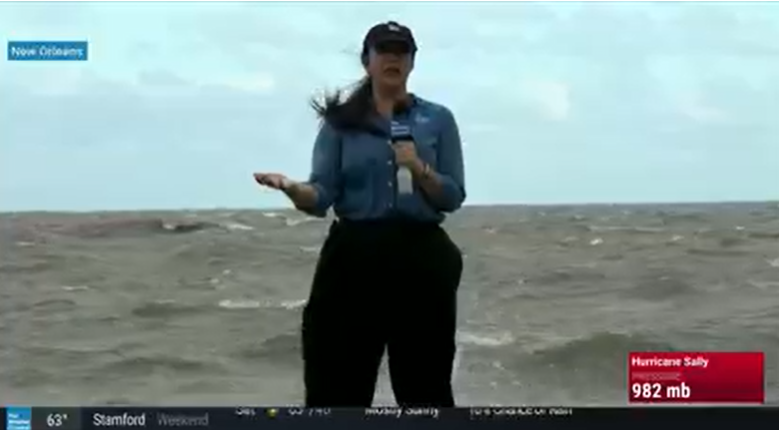 Hurricane Sally is presently a Category 1 storm approaching the Mississippi Gulf Coast and is expected to make landfall between Tuesday and Wednesday, impacting Louisiana, Mississippi, Florida, Alabama and the Florida Panhandle.

At this time, it’s about 60 miles east of the mouth of the Mississippi River, and 105 miles south of Mobile, Ala. Sally is moving northwest, presently at just two miles per hour with maximum sustained winds of 80 miles per hour (Category 1 hurricane).

Two miles per hour is slower than the average human walking pace. TWC meteorologist Paul Goodloe gives us an example.

What does the forward speed of #hurricane #Sally look like? @weatherchannel pic.twitter.com/jxewEaYNok

We’ve got a while til this makes landfall. 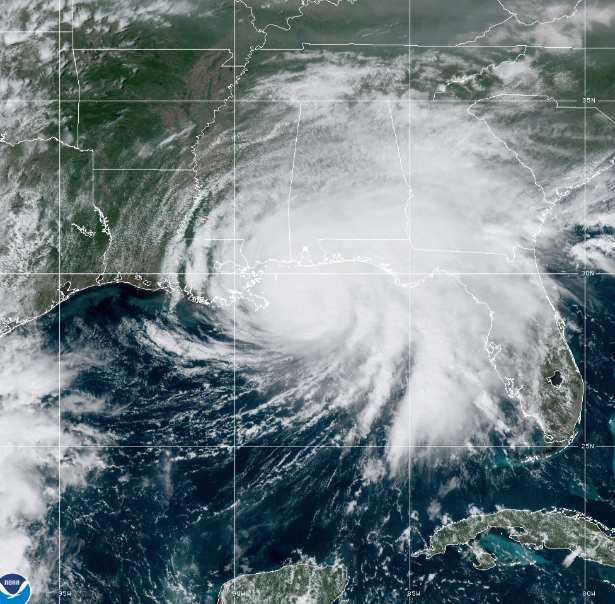 The Weather Channel has the most substantial presence on the ground of any news network.

Mike Seidel is in Bay St. Louis, Miss. Paul Goodloe is in Gulf Shores, Ala. Jim Cantore and Jordan Steele are both in Gulfport, Miss.

Getting pretty nasty on the bay side of Pensacola Beach. #Sally pic.twitter.com/t8LEiL7Obn

Reynolds Wolf is in Mobile. Felicia Combs is in New Orleans. Stephanie Abrams and Tevin Wooten are in Pascagoula, Miss.

We’re LIVE in the field tracking Hurricane #Sally. Stick with The Weather Channel as we monitor this storm throughout the night. pic.twitter.com/tNsq7IzuXD

Check out the wave action via @Trishrags in Gulf Shores, AL as #Sally crawls toward the Gulf Coast. #Hurricane Warnings Pass Christian, MS to Navarre, FL. 24-hour coverage on @weatherchannel

TWC’s Mark Eliot with a wild piece of infomation:

TWC is starting to run out of names … and we’re only halfway through the month of September.

September is the most active month of hurricane season… And we have the development to prove it!

With #Paulette, #Rene, #Sally, #Teddy, and #Vicky all in the Atlantic, #Wilfred is our last remaining name before we move to the Greek alphabet, only previously needed in 2005. pic.twitter.com/BFK6QyRHke

ABC News chief meteorologist Ginger Zee is reporting from Mobile, where conditions are worsening. This tweet is from 1 p.m. ET:

My new friend Judy in Mobile let us come watch Mobile Bay rip from her lawn— with those persistent East winds, flooding already happening on some roads south of mobile. I’ll have the #Sally forecast on @ABCWorldNews pic.twitter.com/tgLzzxbJxK

In addition to Zee, ABC News has meteorologist Rob Marciano on the ground in Pensacola, and multiplatform reporter Elwyn Lopez will be in Louisiana.

Fox News correspondents Casey Stegall and Ray Bogan will be reporting live from New Orleans, and correspondent Leland Vittert is on the ground in Mobile.

NBC News has Sam Brock in Pensacola, Fla., and Morgan Chesky in Mobile, while MSNBC has Chris Jansing also reporting from Mobile and Ali Velshi reporting from Orange Beach, Ala.

Tropical Storm Sally is expected to make landfall as a hurricane somewhere along the LA/MS/AL coastline late Tuesday. I’m heading there to cover it.

This is where Velshi is heading:

NBC News Digital is tracking Hurricane Sally as it approaches the Gulf Coast in a constantly updating interactive with the latest storm projections.

For CBS News, David Begnaud is in Pensacola Beach and Manuel Bojorquez is in Mobile. Both are reporting for all CBS News broadcasts and platforms, including CBS This Morning, the CBS Evening News and CBSN.

CBS This Morning will begin the network’s coverage from New York tomorrow with a team of correspondents reporting from the Gulf Coast, while CBS News meteorologist and climate specialist Jeff Berardelli delivers the latest forecast from New York.

The CBS Evening News with Norah O’Donnell will provide the latest forecast from WCBS-TV chief weathercaster Lonnie Quinn and on-the-ground coverage from the Gulf Coast.

Over at CNN, as of publication time, Ed Lavandera, Gary Tuchmann and Polo Sandoval are moving around the Gulf Coast covering Sally for CNN U.S., and Gustavo Valdes and Yilber Vega are in the region for CNN en Espanol.

In addition, Univision’s chief meteorologist Albert Martínez provides the latest updates and forecasts on Sally, its strength and path. UnivisionNoticias.com will also be covering the latest on the hurricane.