NEXT:Wednesday, May 13 Scoreboard: 4.7 Million Tuned In to Hannity; Fox News Won Each Daypart in Total Viewers and A25-54
PREVIOUS:GMA Throws a Live Virtual Graduation for Students at New York's Urban Assembly School for Emergency Management 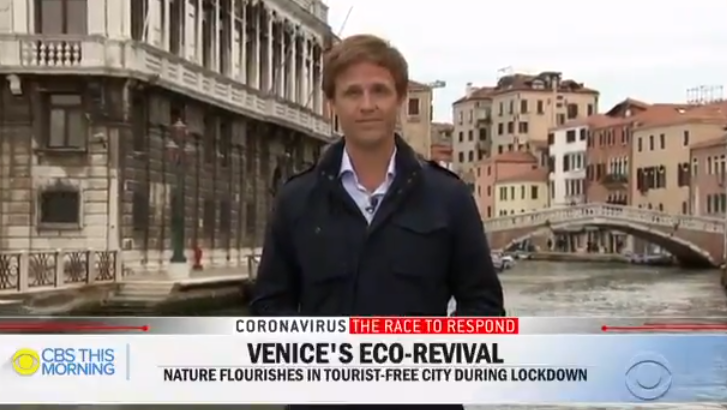 Livesay, most recently a freelance journalist, began reporting for CBS in March at the height of the Covid-19 outbreak in Italy, and has provided extensive coverage across that country throughout the pandemic.

Livesay was the first U.S. television reporter to go inside an ICU in Italy, when the country was at the epicenter of the crisis and doctors inside the hospital turned scuba masks into ventilators as supplies ran low. He has reported from Northern Italy where cemeteries couldn’t keep up with the number of bodies.

Livesay also found bright spots amid the suffering; in Venice, he spoke with volunteers who delivered supplies to those in need in gondolas via the city’s famous canals. This week, he reported from Venice that nature is flourishing, with streets and canals nearly empty of people and transportation.

An unintended benefit in the lockdown orders facing most of the world has been the positive impact on the environment. Without the swarms of tourists it normally sees, Venice’s ecosystem has seen a resurgence.@SayChrisLive looks at how nature is suddenly flourishing there. pic.twitter.com/dwlja11CJA

Before joining CBS News, Livesay reported around the globe for PBS NewsHour, Frontline and NPR. He has covered stories with global impact, such as the targeted killing of Iranian General Qassim Soleimani, the protests in Hong Kong and the priest sex abuse scandals at the Vatican. In 2018, he was the first American TV correspondent to report from Libya in almost a year and had to flee the country amid government threats for shedding light on migrant trafficking, torture and abuse. In 2016, he was among the first TV journalists to report from Mosul on the front lines of the Iraqi military’s push to remove ISIS.