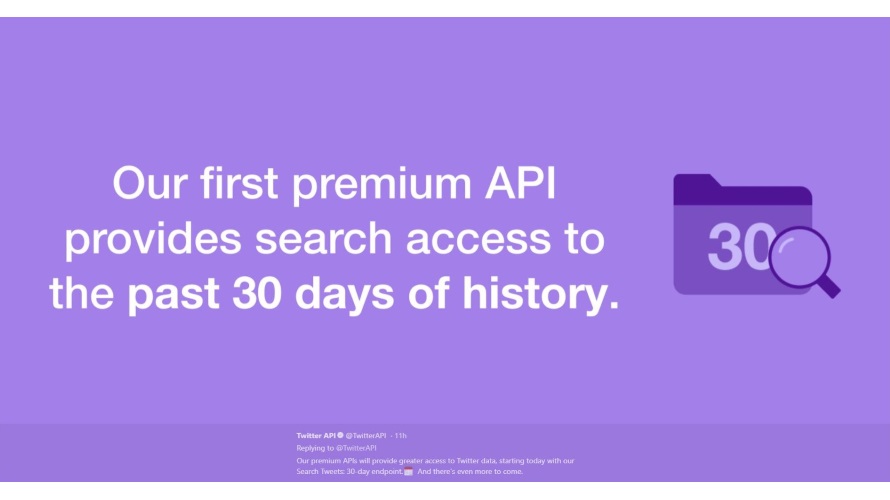 Twitter developers who don’t get enough data out of the social network’s free standard application-programming interfaces but don’t have room for the Gnip enterprise APIs in their budgets now have access to a middle ground.

Senior product manager Adam Tornes introduced Twitter’s new premium APIs in a blog post, saying that the initiative will kick off with the public beta launch of the Search Tweets API Tuesday.

Tornes said of the only two API options prior to Tuesday’s announcement that Twitter’s standard APIs offered “basic query functionality and foundational access” to Twitter data, while enterprise APIs give developers access to “real-time and historical data to power businesses at scale,” adding, “This left a gap that made it painful for growing businesses to deliver scalable solutions to customers—a concern that we’ve heard at developer events, in our forums and in conversations. You’ve also asked us to make it easier to innovate and test new ideas.”

The new premium APIs “bring the reliability and stability of our enterprise APIs to our broader developer ecosystem for the first time,” Tornes said, adding that the initiative includes “a clear upgrade path that scales access and price” to fit developers’ needs.

On the topic of price, premium APIs include flexible, month-to-month contracts and scaled access tiers based on number of requests, and access to the Search Tweets API starts at $149 per month.

The Search Tweets API provides access to the past 30 days of data from the social network, with plans to extend that back to the first tweet in 2006, and Tornes said that improvements over the search tweets endpoint in the standard API include:

Twitter also announced a new self-serve portal for developers, giving them “more transparent access” to their data usage and allowing them to upgrade levels of access and move to premium functionality as needed, as well as to manage subscriptions and payments.

Tornes said developers interested in the public beta for the premium Search Tweets API and new dashboard can apply here.