Trump Among Finalists for Time’s ‘Person of The Year’ 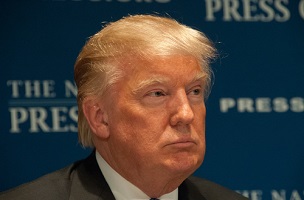 Donald Trump is one step closer to having his media dream come true. The sexist, racist presidential-hopeful is among the eight finalists for Time’s Person of The Year award.

During a recent speech to supporters, Trump—who was on the cover of Time in August—said the magazine would never name him POY.

We assume Trump said this because he’s an awful human, but other POY finalists include ISIS leader Abu Bakr Al-Baghdadi and Vladimir Putin, so really, he has a pretty damn good chance of winning.

Below are the other POY finalists, in no specific order. The winner will be announced Wednesday.