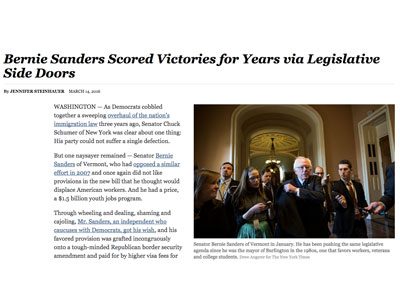 Among those critical of the changes made by New York Times editors to a Jennifer Steinhauer penned article about Bernie Sanders: The Rolling Stone‘s Matt Taibbi, The Washington Post‘s Erik Wemple, Medium blogger The Broken Ravioli and  Gawker‘s Brendan O’Connor.

Adding her voice to the debate is the Times’ own public editor. Here’s what Margaret Sullivan had to say about a piece in which the editors, per Sullivan, “made significant changes to its tone and content, turning it from almost glowing to somewhat disparaging.”

First she notes the sentiments of the vox populi, at least as represented by vocal NYT readers:

Hundreds of Times readers expressed their disappointment or anger in emails to me on Tuesday and Wednesday, as well as on Twitter and Facebook. Many saw these changes as evidence that The Times strongly favors Mrs. Clinton’s candidacy. And some object to the practice of making substantial changes to articles without explaining that to readers – a practice sometimes called “stealth editing.”

And what of the question of stealth editing, and whether the Times editors should have noted the changes, even if it’s not explicitly NYT policy?

The changes to this story were so substantive that a reader who saw the piece when it first went up might come away with a very different sense of Mr. Sanders’s legislative accomplishments than one who saw it hours later. (The Sanders campaign shared the initial story on social media; it’s hard to imagine it would have done that if the edited version had appeared first.)

Given the level of revision, transparency with the readers required that they be given some kind of heads-up, and even an explanation.

Sullivan updates her Post a few hours later, reflecting additional arguments raised by readers, whom she expresses agreement with (emphasis ours):

A number of readers have made a point that I should have made earlier. The Sanders article was not a breaking news story, but rather a look back at his legislative record. Given its sensitivity and importance (it ended up on the front page on the morning of major primaries), why didn’t senior editors vet the story and make all the editing changes before it went online? Digital platforms, after all, are not a test run, and non-urgent stories don’t need to be pushed out as quickly as this one apparently was. I would also observe that the “context” added here looked a lot like plain-old opinion to this reader, and quite a few others.