Mariah Carey Changed Her Mind About Doing A ‘Beyonce Surprise’, Will Be Dropping a New Album With a Familiar Cover 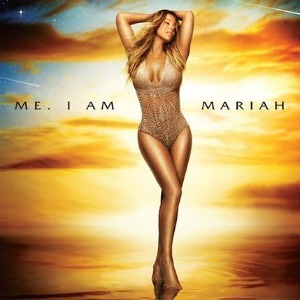 Let’s start by prefacing this post with the fact that Mariah Carey gets on my nerves. I need only to link to this monstrosity from an appearance last summer on GMA to explain why. Mariah has this incredible once-in-a-generation voice and instead of belting out her songs and singing from the rooftops like no one’s business, she relies on these glitter-and-butterfly, sit-on-a-throne-with-no-shoes-on antics to get attention. It’s cringe-worthy and stupid and irritating all at the same time.

You know who has a tremendous voice and would never indulge in this absurdity? Adele. Let’s have more Adele shall we?

That said, Mariah has a new album coming on May 27. At one point this album was supposed to be released a la the “Beyonce surprise” — all at once without all the advanced notice of a traditional release strategy. Now, that’s not the case, there’s some issue with what the release date was supposed to be and there’s cross-talk between the publicists.

So we get this Billboard pre-release cover story instead where even the writer seems to have a hard time pinning down what she’s trying to say about it.

“Talk to Carey about the album, and you’ll get lengthy if cryptically worded explanations about the material, making liberal use of favorite words like ‘journey’ (‘If I use that word one more time I’ll have to start an ’80s rock band’), ‘festive’ (her time on Idol, she says, ‘was not festive’) and ‘moment’ (‘I just need a moment to finish this track listing’),” it says. *Blank stare*

The story also makes the point that this album is a comeback of sorts. Though she has released music over the past few years, she hasn’t had a full album in five. And the songs that were released in the interim didn’t reach nearly the same levels of success that she’s used to. That some of the details aren’t sorted in preparation of a big splash isn’t a great way to kick things off.

So moving on, we got the name of the album and the album cover today, which, Jezebel points out, looks very similar to the covers of her previous albums. Well, if it works right? She does pull a “Beyonce” in the launch by including a little personal video explainer, where she says the name of the album, “Me. I Am Mariah,” is based on her “first and only self-portrait” drawn when she was three years old.

I am sighing to the heavens. Really, I can’t.

Finally, because this is all not enough, there’s a tagline that comes from the nickname she says she’s been getting a whole lot lately: “The Elusive Chanteuse.” I don’t believe that people have been calling her that because it’s not a nickname and no one would say that. “Mimi,” which a lot of people do call her, is a nickname. “The Elusive Chanteuse” is something you want other people to call you because you think it sounds cool. I’m going to go out on a limb and say this nickname will not stick.

Mariah Carey has tons of fans so I’m sure this album will do just fine. But I wonder if she wouldn’t benefit from a make under. Just come out, wear a beautiful dress, a butterfly ring if you must, and sing a song and knock everyone’s socks off. That’s what made her famous in the first place.