Why Your High School Classmates are Unfriending You

High school classmates were more commonly unfriended for posting too often about polarizing and unimportant topics. 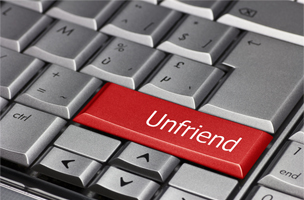 Christopher Sibona of the University of Colorado Denver wanted a clearer understanding of unfriending behaviors on Facebook to aid researchers in the development of models for a life cycle of online relationships.

Following up on past research that determined the most common reasons for unfriending on Facebook — frequent/unimportant posts, polarizing posts (politics and religion), inappropriate posts (sexist, racist remarks) and everyday life posts (child, spouse, eating habits, etc.) — Sibona wanted to see which friend types are most commonly unfriended and why.

Sibona used a non-random survey to determine opinions and behaviors about unfriending on Facebook. Twitter users who posted about unfriending were sent a reply asking them to participate in the survey; a total of 1,552 respondents completed the survey.

Respondents named the last individual who they unfriended choosing from 15 friend types and an “other” category. Respondents who chose “other” often specified the relationship as “didn’t know her,” “enemy,” and “former student.”

The 15 categories of friend types classified 87.5 percent of the relationships; the remaining 12.5 percent were speciﬁed as “other.” The majority of unfriending (52.8 percent) took place among high school friends, coworkers, common-interest friends and college friends.

People often become Facebook friends with their high school classmates for social surveillance purposes, rather than to keep in touch with them on a more personal level. And because high school friends may not be seen as much as work-related types for geographical reasons, they may be unfriended less for disliked ofﬂine behavior.

Survey respondents who unfriended high school friends indicated that the person they unfriended posted significantly more often about polarizing topics and frequent/unimportant topics than friends who were not from high school. Posting frequently about unimportant topics was less likely to be related to unfriending for work-related friends compared to other friend types.

The research results are also helpful in that they contextualize friendships and unfriending beyond broad categories of Facebook friends. The context of specific friend types can aid in understanding the life-cycle of online relationships — some relationships will be maintained or strengthened, while others will be dissolved through unfriending.