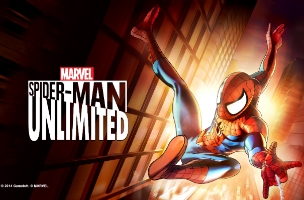 Gameloft and Marvel have launched Spider-Man Unlimited on smartphone and tablet devices, giving players access to a new experience called a “web-runner.” The game is a take on the popular endless runner genre, and sees players racing across the rooftops of New York City, as well as swinging between buildings, in an effort to defeat Spider-Man’s enemies.

This episodic adventure game sees Spider-Man tracking down the Sinister Six, who have come to Earth to gather a rare isotope called ISO-8, with no regard for the destruction they’ll cause in the process. Spider-Man must find and defeat these enemies one-by-one, through level-based “issues” or chapters of the game.

In each encounter, Spider-Man runs away from the screen automatically, and players swipe left and right on the screen to move between three lanes, avoiding obstacles and collecting Vials (currency) on the path. The path sometimes narrows to only one or two available lane(s), increasing the challenge. Players swipe up to jump over obstacles, or swipe down to slide under them. At certain points, players are given the ability to web-swing between buildings by tapping and holding on the screen to swing. Some areas are split into multiple levels, giving players the option of running on the ground level, or staying up top. Finally, players will occasionally come upon wall-scaling or free-falling encounters, which see them tilting their devices to avoid obstacles.

Lesser enemies are scattered throughout stages, and can be defeated by swiping up or down on the screen, depending on the enemy. That is, a flying enemy can be defeated by swiping up to swat them out of the air, while a shielded enemy requires a downward swipe to take out their legs. Boss fights are also available, and may see players swiping up on projectiles to launch them at enemies, before they’re asked to rapidly tap on the screen to finally defeat them (as one example).

Power-ups will appear at random across the three lanes, and may cause Vials to be worth double for a limited amount of time, or can make Spider-Man invincible for a few seconds, as examples. These power-ups can be upgraded in the game’s store using Vials.

In addition to the main story-based missions, players can complete side quests on the level-map for additional rewards, like experience points and ISO-8 crystals (premium currency). Side quests may see players defeating enemies in bulk to collect intel, reaching a New York City landmark by running a certain number of meters, picking up collectable items on the path, and so on. All missions require energy to begin, but this recharges automatically over time (or can be purchased with real money).

Outside of missions, players can experience a traditional endless running game in the title’s unlimited mode, which challenges players to last as long as they can, collecting Vials and defeating enemies to earn a high score and experience points. Players can compare their high scores with friends via Facebook Connect.

Finally, limited time events are available to challenge players with a specific task. The game’s current event, for instance, asks players to run a large number of meters to earn free ISO-8 crystals, Vials and playable units. In both unlimited and event mode, players can purchase power-ups before they begin their run. These may give players an increased score multiplier, a boost in Vials after defeating enemies or an increased combo counter during combat.

Players have access to multiple playable versions of Spider-Man in the game, which are collected like collectible cards. Each can be leveled up by earning experience points after each run, which increases their high score potential. Each Spider-Man also has his own unique skill. Base Spider-Man, for instance, levels up 15 percent faster than others, while Mangaverse Spider-Man earns a 30 percent score bonus when collecting Vials.

While many story missions can be accessed with any kind of Spider-Man, some are only accessible with specific units, incentivizing players to collect as many different types as possible. Players are limited to the number of units they can store in their inventory, but can purchase additional storage slots with Vials.

Users have multiple options for collecting new characters. They can spend their Vials on standard-issue, or more common Spider-Men, or spend ISO-8 crystals for a guaranteed “rare” Spider-Man. It’s possible to collect duplicate Spider-Man through this system, so Vials can be used to fuse excess characters with existing Spider-Men for an instant experience point boost. Once a Spider-Man character reaches level 10, it can be “ranked up” with another matching Spider-Man to increase its max level even higher. That is, a one-star Mangaverse Spider-Man with a maximum level of 10 would be increased to a two-star unit with a maximum level of 20.

“Gameloft is thrilled to be working again with Marvel to provide Spider-Man fans with a faithful recreation of the comics, combined with an action-packed, chaotic runner experience,” says Karine Kaiser, VP of Marketing & Licensing at Gameloft, in a company statement. “With Spider-Man Unlimited, fans will enjoy a narrative-driven adventure featuring all of Spider-Man’s unlimited powers.”

Spider-Man Unlimited is available to download for free on the iTunes App Store, Google Play, and the Windows Phone Store.