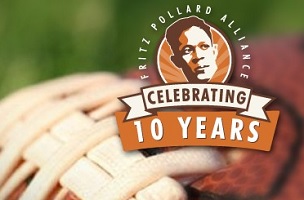 According to the article by Mark Maske and John Woodrow Cox, the group endured a contentious August meeting at Redskins training camp, mainly because of the objections and interruptions of one participant. Even so, New York Giants Hall of Fame linebacker and Fritz Pollard executive director Harry Carson told the reporters he was impressed by information gleaned about owner Dan Snyder‘s support of work carried out on Native American reservations. However, the business of the football season soon took over:

The group continued contacting the team, but months passed without a definitive response. Then, at the Redskins’ game against the Giants at MetLife Stadium on December 14, Carson approached [Redskins president Bruce] Allen on the sideline.

Allen, he said, told him that the name controversy was no longer relevant, as it had become little more than a tool lawmakers used for political gain. Through a spokesman, Allen declined to comment on the exchange.

Fritz Pollard chairman and former Redskins linebacker John Wooten, who together with Carson co-signed the letter circulating to organization members today, told the Post he is disappointed the team refused his offer to mediate a meeting with activist groups.