For the first time in its 95-year history 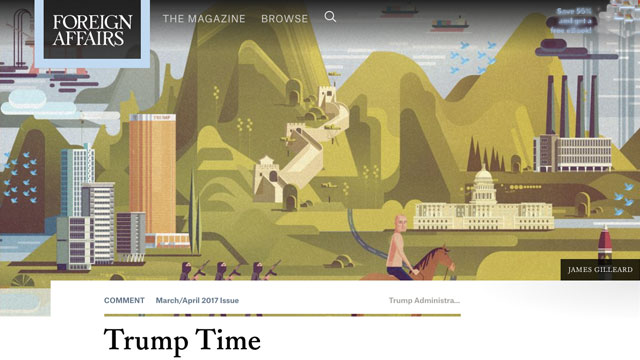 The 95-year-old Foreign Affairs magazine, published by the the Council on Foreign Relations, hit a milestone this past December when its total paid circulation numbers passed the 200,000 mark for the first time in the magazine’s almost century-long existence.

The numbers, announced by the publication, were based on a December 2016 Snapshot by the Alliance for Audited Media. The strong circulation figures were bolstered by 17.5 percent year-over-year growth in single-issue sales for the bi-monthly magazine.

In a statement, Foreign Affairs interim publisher Mia Higgins attributed the growth to “demonstrated consumer appetite for thoughtful and reasoned discourse about public policy.” Is that desire related to the same election/post-election reader needs driving subscription sales at outlets like The New York Times?

Could be. The latest issue, called Trump Time, is out now, offering a lot of “Trump and…” analysis, with pieces that look at Trump at the intersection of Russia, China, North Korea, terrorism, the “world order” and more. According to Foreign Affairs, the issue is already on track to break magazine records in downloads and page views.