For SNL’s Cold Open, Tears, Not Laughs, From Kate McKinnon

Dressed in character as Clinton, she plays Leonard Cohen's Hallelujah. 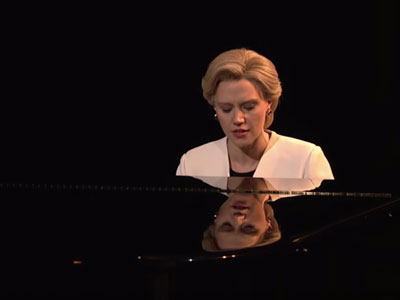 Saturday Night Live’s cold open began with the camera focused on hands at a piano, pressing keys into familiar chords. It zoomed out to reveal Kate McKinnon, dressed, once more, as Hillary Clinton, playing and singing Hallelujah, the enduring hit from Leonard Cohen, who passed away on Monday.

A week ago, the idea of Clinton sitting at a piano in a white pantsuit would have been funny. Nearing the end of this long week, it was an elegy to what was lost.

I did my best, it wasn’t much
I couldn’t feel, so I tried to touch
I’ve told the truth, I didn’t come to fool you
And even though it all went wrong
I’ll stand before the Lord of Song
With nothing on my tongue but Hallelujah

Done singing the final “hallelujah,” she turned, teary eyed, to the camera to deliver a message. “I’m not giving up, and neither should you,” she said.

This election has shown America is not post- many things. What it was, if for a moment, was post-humor, even on a comedy show.