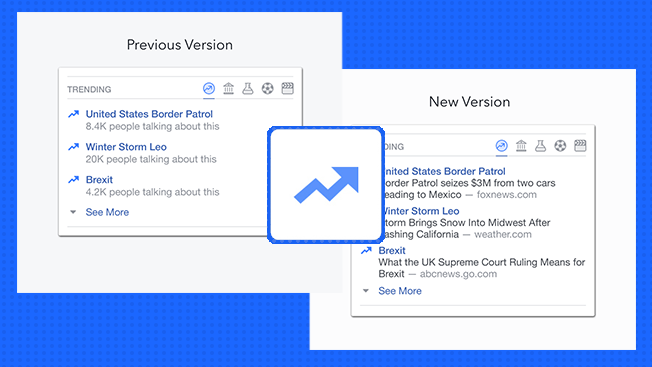 Facebook is hoping the latest changes to its Trending section will make the company's attempts to be a news service a little stronger.

The social network has begun rolling out updates to the list of news items on every user's homepage, adding more context with headlines and moving away from personalized suggestions.

In a blog post today explaining the latest version of Trending, Facebook's vp of product management, Will Cathcart, said the updates reflect the most requested changes from users. Changes will start appearing today and will be available to everyone in the U.S. within "the coming weeks," according to Cathcart's post.

In order to make the section more relevant, Facebook is changing how it identifies trending topics. While topics were highlighted in the past based on what users were engaging with on the platform, Facebook will now factor in the number of publishers posting about a given topic, along with the type of engagement it's getting.

"This should surface trending topics quicker, be more effective at capturing a broader range of news and events from around the world and also help ensure that trending topics reflect real world events being covered by multiple news outlets," Cathcart wrote.

Facebook is also adding context to each set of keywords. Now, topics will be accompanied by a headline from one of the publishers that's written about the subject, a feature Facebook says has been requested more than any other since it fired most of its journalist curators and gave more authority to algorithms in August. (At the time, Facebook said it was intended to help remove political bias from the system.)

According to Facebook, headlines will be automatically selected based on user engagement with the topic, overall engagement with the publisher and whether people are clicking on the link. Headlines have appeared for months when users hover over links, but now they will appear right next to the topic.

Topics will also soon be more relevant regionally, allowing Facebook to show everyone in a given area the same news.

Facebook is also beginning to roll out its game plan for showing real news. After months of widespread criticism for its role in helping disseminate rumors and falsehoods during the 2016 presidential election, the company said its changes to Trending could cut down on fake news on the platform.

"Trending uses a variety of signals from News Feed, including when people report news as fake or spam, to help prevent fake news, hoaxes or spam from appearing in Trending," Cathcart said. "Today's update may also help prevent hoaxes and fake news from appearing in Trending because the updated system identifies groups of articles shared on Facebook instead of relying solely on mentions of a topic."

In response to the updates, Media Matters president Angelo Carusone issued a statement describing the changes as "at best a marginal improvement."

"While moving in the right direction, these half-measures will not stop the rampant lies spreading on the platform," Carusone said in the statement. "We can't forget that Facebook made the problem of fake news significantly worse when they acted on right-wing misinformation and fired all their human editors over the summer and let their algorithms get gamed."

Carusone also commended Snapchat for updating its own policies this week by prohibiting publishers from posting false or misleading content or linking to outside websites that do.

"Facebook's timidity in addressing this problem will prove bad for business and stands in stark contrast to Snapchat's bold actions earlier this week that were aimed at stopping the spread of lies and false impressions," he said. "So, we're encouraged by the small improvements, specifically the changes to transparency in the trending topics section, but we await Facebook prioritizing truth in the same way their competitors have demonstrated."