These days, next to cooking, there’s no surer reality TV bet than fashion. Even more so when the person at the center of a fashion project is a famous, glamorous name. 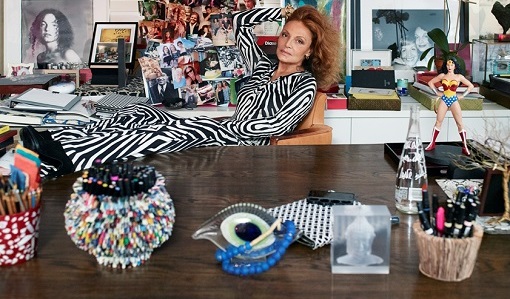 Announced this week and coming in late 2014, The DVF Project will combine a behind-the-scenes look at Mrs. Barry Diller’s empire with the golden-ticket premise of a group of chosen young women vying for a position with her company. Think of it as The Diane’s version of The Apprentice:

“Diane von Furstenberg is one of fashion’s most innovative designers and a true icon who inspires women to seize opportunities,” said Jeff Olde, executive vice president, programming and development, E!. “There is a magical, somewhat Willy Wonka aspect to the world Diane wants to create with this show. That is if Willy Wonka were a fabulous, glamorous fashion icon willing to share her secrets with talented young women dedicated to learning them.”

The series will follow the competing women to New York Fashion Week and beyond. It’s being produced for E! by Ben Silverman’s Electus and Michael Rourke’s Hud:sun Media. Hud:sun previously helped fashion brand Nine West launch a YouTube channel and was involved with the series Unracked with Gilt Groupe.

P.S. If the show is anywhere near as cool as the photo above, E! should have a ratings winner.