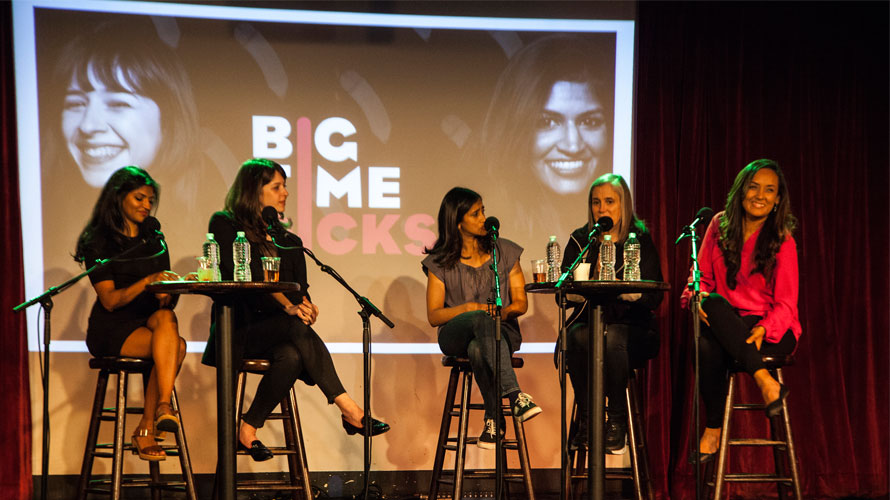 If you’ve never seen a man dressed in a nearly head-to-toe penis costume, you would have had your chance at the Big Time Dicks’ first live podcast, which taped Wednesday night from the Bell House in Brooklyn. He crawled across the stage, moaning, before getting up to introduce the podcast hosts, Jezebel senior reporter Prachi Gupta and managing editor Joanna Rothkopf.

It was an appropriate beginning to a podcast infused with bits of cathartic irreverence, beginning with its name, helping to take away some of the edge off its focus, a discussion of Trump-era policy. In this way the live show was an echo of the regular podcast. “I think it was fun and conversational,” Gupta told Fishbowl in an interview following the show, “and sort of exactly the way our podcast is, which is that we talk about really serious stuff, but then we also laugh, we’re able to process it at the same time, reflect on everything with a sense of humor.”

But the particular mix of guests, which included comedian and former Late Night with Seth Meyers writer Aparna Nancherla, Democracy Now! host and executive producer Amy Goodman and Erika Andiola, an immigration activist, political director for Our Revolution and former press secretary for the Bernie Sanders campaign, was chosen specifically for the live show.

“We started designing the show from the perspective of a six-month retrospective on the administration,” says Gupta. With that in mind, “there wasn’t one single issue we specifically wanted to address; it was the entire administration. And so, because of that, we wanted to open it up to multiple perspectives.”

It was a good, if not necessarily intuitive mix. Nancherla got the laughs going, Goodman’s elegantly reasoned commentary received rounds of applause, and Andiola created another kind of catharsis when she described her regular drop-everything moments in which she traveled to her family’s home state to ensure that her undocumented mother’s required check-ins with ICE did not end in deportation.

There was something else linking the guests together–they were all women. Perhaps in the future this is a fact that will become matter of fact, but in our current era (hello, Vida Count et. al.), it requires an intentionality. But just as you wouldn’t assume a panel comprised completely of men is targeted to men only, don’t assume what is discussed on Big Time Dicks is of concern only to women. 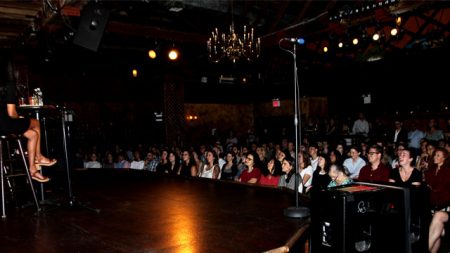 The audience skewed female, but was by no means female-only, and two of the four audience members participating in the Q&A were men, which is quite possibly both a good and bad thing.

“We have a lot of listeners, a lot of readers who are men,” says Rothkopf by way of explaining that mix. “Men care about this stuff too.”

It’s also one face of a multi-sided idea that Rothkopf says Jezebel has been contemplating as it relates to its politics section, The Slot. “It’s kind of lame to give women only one set of issues and they’re all like health-related and motherhood-related, and so on our podcast, we do talk about things that are traditionally women’s issues, but everything that affects people is a women’s issue.”

“I mean, if I’m thinking about it, to me, as a woman, it’s now an issue as a woman I care about,” says Gupta. “So we don’t think about it through that lens, specifically. We think about it as, we’re a politics podcast and we are two women who are conscious of the fact that we’re women.”

“The thing that makes us a women’s podcast is that we’re women and we’re not two white men being like, ‘politics: here are the bad things, here are the things that we’re concerned about,'” says Rothkopf.