Harlequin Brings Its Romance-Novel Hunks Into the Real World, With Hidden Cameras Rolling

BBDO arranges fantasy dates with a Viking and a cowboy 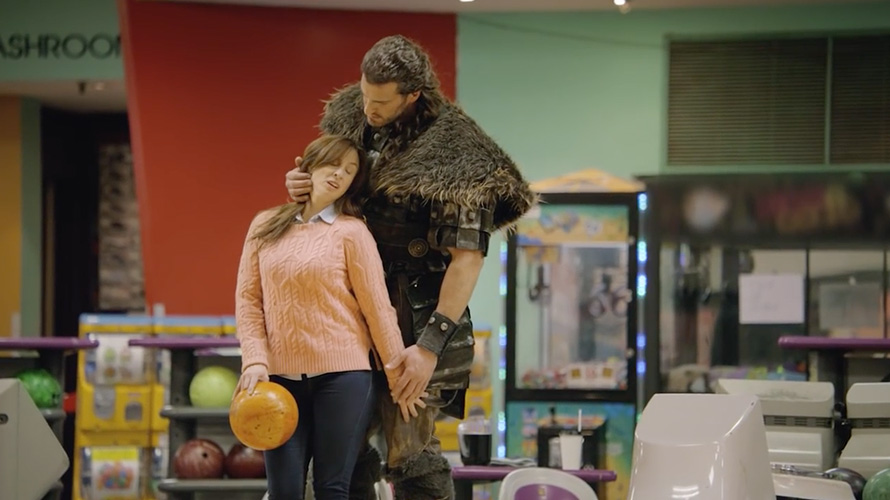 Do you find yourself wishing your dates were like romance novels?

If so, you might enjoy BBDO Toronto’s latest ads for Canadian romance publisher Harlequin Books, which match a pair of contemporary women with two fictional objects of desire—a cowboy and a Viking. Their nights on the town were filmed with hidden cameras to capture the authentic reactions of unsuspecting folks nearby.

First, let’s check in on a nearly 7-foot-tall rugged stud from way up north … and we don’t mean Saskatoon. He’s a Viking, who takes his date to a bowling alley, of course:

Hey, did you see him mow down those pins! Judging from his companion’s face-sucking reaction, he won’t be striking out later on back at the ol’ … condo? Or wherever Vikings live these days.

“It was really all about how to leverage the most exciting element of the brand experience—the Harlequin heartthrobs—in the most provocative way,” Chris Booth, BBDO associate creative director, tells Adweek. “We stumbled across the idea of bringing the readers’ fantastical experience with the book to the real world.”

As for the broader strategy, “the core readership for Harlequin is women 40 and up from medium-sized towns in middle America,” he says. “They spend a relatively smaller amount of time online, but are engaged with social networks and love to share. So keeping our execution simple in terms of interactivity was important. Video is easy to consume and easy to share, so it was the natural answer.”

Next, fresh from the dusty trail, an amorous cowboy transports his date to a trendy restaurant atop his trusty stallion. (Guess they don’t have Ubers out on the range.)

Those chaps! That lariat! Our lovebirds are in for a wild ride back at the ol’ corral. Eeeeha!

“Both women are actors with strong improv backgrounds,” says Booth. “So, while there was a framework and loose script for their roles, they had a lot of freedom to ad-lib and make the characters their own. They did such an incredible job of contributing so many additional moments of humor.”

Indeed, these ads are amusing, if a bit counterintuitive. Aren’t readers supposed to escape into wonderful, wicked worlds with Harlequin, not incorporate goofy elements from the books into their ordinary lives? (Actually, casting Fabio as a burly buccaneer taking his gal to see a pirate movie at the local multiplex would’ve rocked. Yarr!)

Also, the spots, which are a follow-up to last year’s “Romance When You Need It” campaign, seem a tad tame—but there was a reason for that.

“It was incredible at the cowboy shoot how respectful people were trying to be,” Booth recalls. “We kept having our actors doing more and more ridiculous things to generate reactions, but leave it to polite Canadians to try not to stare or look too much.”