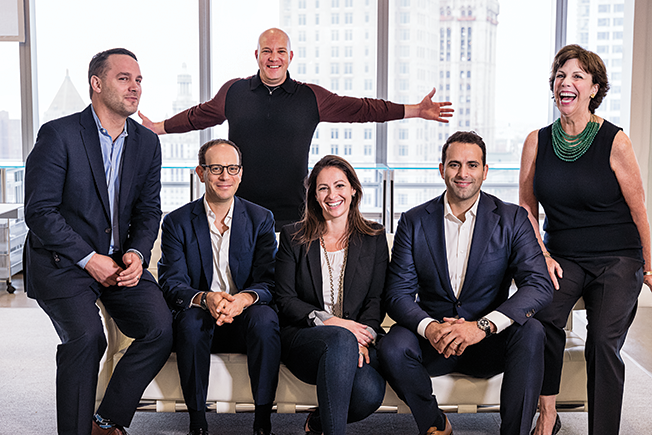 Last December, an agency with no name, no office and no full-time employees shocked the media buying and planning world, without warning, by scooping up the lion's share of the North American business of Procter & Gamble, the world's largest advertiser. It followed that coup this past August by winning AT&T, the second-biggest media client in North America. The pair of wins encompassed approximately $5 billion in annual billings for two highly visible accounts that had been with Publicis and WPP, respectively, before moving on to their main rival, Omnicom (Dentsu Aegis' Carat retained some P&G business).

It seemed like a modern miracle. But the agency, Omnicom's Hearts & Science, is anything but an overnight success story.

New York's 7 World Trade Center rises 52 floors above the footprints of the former twin towers, where thousands flood into lower Manhattan daily. The floor-to-ceiling windows of the shop's headquarters on the 36th floor look out onto the Hudson River and beyond. Several blocks and more than a century removed from here is the American Telephone & Telegraph Building at 195 Broadway, which for years served as AT&T's home base. The neo-Classical icon, which hosted history's first intercontinental phone call in 1927, now houses the common thread weaving through this story's key players: a little-known data analytics company called Annalect.

Annalect founder Scott Hagedorn was a natural choice to lead the then still unnamed Hearts & Science after its P&G win took the industry by storm and Omnicom raced to build a new network almost entirely from scratch. It was Hagedorn, a 12-year veteran of Rapp, OMD and PHD, who answered the call in 2010 when Omnicom Media Group global chairman and CEO Daryl Simm and Omnicom CEO John Wren requested a review of the larger organization's data and analytics assets. That spark was the genesis of what would eventually become the holding company's not-so-secret media weapon.

"Annalect is part of the foundation of Omnicom Media Group in that it supports all of our agencies across the group and all of our capabilities," explains Simm. "But the broader vision here is we really have created a third media agency within our group that has a distinct positioning." Consequently, most of Hearts' leaders had for years worked together at other OMG shops and were all familiar with the Annalect platform.

The central, "disruptive" idea was simple: Omnicom decided that the most effective way to capitalize on the marketing world's increasing reliance on data wasn't to acquire an outside organization but, rather, build a new one from within. "The reality is that we live in a world where CRM and addressable media channels are colliding," Hagedorn says. That is to say, the customer base of virtually every business has moved dramatically toward consuming media via mobile platforms and apps. Even the casual observer would conclude that the future of marketing, therefore, centers on using the data trails spawned by this behavioral trend in order to more effectively orchestrate creative campaigns. Annalect started as Omnicom's long-term effort to get ahead of this trend—or at least to keep from falling behind.

"We invested north of $10 million globally to create a [data management platform] five years ago for all of our clients because we thought it was going to be the new standard in marketing," says Hagedorn. "We're the first holding company to pay for doing one independently."

Today, Annalect is at the center of the Hearts operation. Hagedorn and company began to build the networkwide system by compiling multiple outside software programs, buying new assets and "renting out" others, and collaborating with a chain of programmers from New York to Bangalore (8 percent of Hearts' employees are in India).

"We took what had been a back-office capability [in Annalect] and brought it all the way to the front," Hagedorn explains, with the platform effectively becoming an agency unto itself.

"Look, everybody in our business talks about data," says Hearts president Zachary Treuhaft. "In our case it was about making [that data] practical and actionable." One might say the agency's first pitch was in 2013, when Hagedorn met with Pritchard and P&G's then-chairman Bob McDonald at the Cannes Lions International Festival of Creativity to share the progress he had made on this long-term analytics project. His key argument was that P&G could no longer dominate the market by the sheer virtue of its size and reach. As it faced a growing number of smaller, more agile challengers, it would have to target consumers on an individual level instead.

Pritchard apparently never forgot that presentation when P&G launched a media agency review in May 2015.

"Omnicom Media Group had an opportunity to be invited into the P&G pitch," notes Hearts & Science COO Kathleen Brookbanks, who calls fellow OMD vet Hagedorn the yin to her yang. "The decision was that Scott would lead and we would pitch on the back of everything we had learned over the five years since he [started building] Annalect."

P&G, like so many clients, had been moving toward what pharma giant GSK called an "agency simplification" in the interest of cutting unnecessary marketing expenses and partners. Hagedorn recalls that "there was a savings component" to the P&G pitch, but his underlying strategy was the same one that helped an Annalect-powered PHD win Volkswagen and GSK: behavioral segmentation of audiences to facilitate smarter media spends.

The Hearts & Science group viewed P&G as a large, slow-moving vessel that needed a steady hand to guide its shift toward individualized marketing. "[Scott] had a vision of what the future of the agency business looked like," says managing director of marketing sciences Mike Storms, "and we were just waiting for the right place to act on it." Kind of like an industry Voltron, the agency ultimately reflected a group of well-tested parts ready to come together as a whole when an opportunity like P&G arose.

For its part, P&G is ready to adapt as it moves forward with the shop. "We're continuing to learn from each other as we refine the model," says Lauren Hoenig, director, North America media at P&G. "Overall, we're excited about the new capabilities and talent that Hearts & Science has brought, particularly with data, analytics and reporting. As a partner, Hearts has been responsive and agile, with a collaborative approach and strong accountability to helping our brands grow. Those are important foundational elements for us because we view our agencies as critical partners to our success."

The AT&T pitch came several months later. It started as a creative "jump ball" between BBDO and Grey (which worked on AT&T's newest acquisition, DirecTV) but ended as a tug of war over the technical capabilities of the agencies' parent companies. "We want to be even more innovative, efficient and precise in how we reach our customers," explains Fiona Carter, AT&T svp of brand marketing, advertising and sponsorships, about the telecom giant's decision to consolidate its business with Omnicom. Carter, who served as managing director of BBDO New York for more than a decade before moving to the client side, adds: "The integrated team of Hearts & Science and BBDO puts us in the best position to do that. They're delivering data-driven insights to help guide our advertising approach, from thinking and strategy to creative development and media buying. It's a game changer."

AT&T senior evp and global marketing officer Lori Lee was quoted in an industry publication saying Omnicom held a "slight" advantage in the review thanks to a pitch that cast Hearts as a way to enhance BBDO's creative work. Consolidation was especially appealing because, as the industry learned from AT&T's subsequent $85 billion bid for Time Warner, the company hopes for a future in which it owns both the ability to produce content and the distribution network through which it is seen. By combining the incumbent's creative work with Hearts' targeting, Omnicom presented the same sort of vision on the agency side.

"The fundamental premise is building an audience by individuals who we can then segment based on behavioral and contextual characteristics and interests," says BBDO Worldwide president and CEO Andrew Robertson. So rather than marketing to millennials or women 18-34, the AT&T teams at BBDO and Hearts can theoretically take segmentation much further, thereby reducing the risk in spending millions to make and place those ads.